Just in time for the November elections, this is the book that makes Bernie Sanders look like child's play.This is sure to fan the flames of discontent that are roaring across America's political landscape. (first edition cover shown, there will be a new cover for this latest edition) 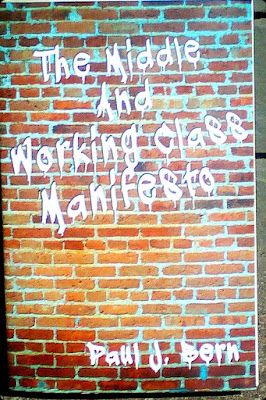 Fall of An Empire Part One: The American Police State

Having spent the first three chapters of this book laying out in complete detail how the US middle class is gradually being liquidated by the rich, the powerful and the politically well-connected, I will use the next three chapters to describe how the obliteration of the American middle and working classes are being enforced, why this pattern of the criminal abuse of power and authority is unsustainable, and what the end result will be if working Americans from all professions do not unite, organize and challenge this abusive ownership and authority. Although much has already been written about these topics by the 'fake news' media, an equal amount has been disseminated by alternative news sources regarding the gradual erosion of the Constitutional rights of every citizen that was carefully spelled out by the founding fathers of our great country during the founding of the United States of America during the latter part of the eighteenth century.

There can be no doubt that the Constitutional rights of every citizen have been and continue to be compromised by the passage of laws such as the Patriot Act and others like it, as well as other proposed unconstitutional actions such as certain proposed gun control legislation. After all, a disarmed US public is a powerless citizenry that would be in the rifle sights of every abusive authoritarian in (and out of) American government including elements of law enforcement, the military and national guard, and countless civilian “contractors”. I will begin by citing examples gleaned from the Internet of just how out of control law enforcement has become in this country, having been given powers of arrest, search and seizure formerly restricted to a military occupation during a declaration of martial law.

For example, on Friday April 25th, 2008, three New York City police officers were cleared by a New York court after admittedly gunning down an unarmed man and his relative, killing one and wounding another. Allow me to quote from a recently-posted news article:

"NEW YORK (Reuters) - Three New York City police officers were found not guilty of all charges on Friday in the shooting death of an unarmed black man killed in a hail of 50 bullets on his wedding day. A New York state judge cleared two officers of manslaughter and other charges and a third of 2nd degree murder after they shot the unarmed victim, along with two friends, after a bachelor party at a strip club in November 2006. After the verdict, loud sobs were heard in the courtroom. Outside, about 200 demonstrators angrily yelled at television cameras. 'They're murderers, criminals, and they are going to rot in hell where they belong,' one man shouted." The article goes on to bear witness to the outrage of the local community and to quote the judge as brushing off responsibility for this social injustice.
"The case has generated outrage in New York's black community, and police prepared for potential unrest with the announcement of the verdict. However, officials said they did not expect violence because numerous demonstrations against the perceived police brutality had remained peaceful. The detectives, Mike Oliver, Marc Cooper and Gescard Isnora, waived their right to a jury trial and decided to have the judge decide guilt or innocence. The defense lawyers said jurors in the borough of Queens were likely to be biased against the policemen due to the intense media coverage the case has generated. State Supreme Court Judge Arthur Cooperman said the charges could not be proved beyond a reasonable doubt. 'Questions of carelessness and incompetence must be left to other forums,' Cooperman said." The article then concludes by exposing the doubtful verdict as one that puts up a wall between those who are sworn to the public safety profession and those whom the system is supposed to be protecting.”

This was a couple years, more in some cases, than what occurred with Trayvon Martin, Eric Garner, and the police lawlessness in Ferguson, Mo several years after that. Since then things have gotten progressively worse, and law-abiding citizens don't know who to me more afraid of – the crooks or the police! It looks like we had all better be on the lookout against this sort of thing, or other unarmed Americans might be the next innocents to be slaughtered. Those who are sworn to protect and to serve have instead become those who are sworn to harass and to intimidate. Can a police state be far behind if this kind of behavior by law enforcement officers is allowed to continue? In another related article having to do with collisions between civilians and police, it would appear that the Constitutionally guaranteed right to protection from unreasonable search and seizure is being ignored and unenforced in certain incidents such as the one I am about to describe.


WASHINGTON - "The Supreme Court affirmed (back in 2009 – PB) that police have the power to conduct searches and seize evidence, even when done during an arrest that turns out to have violated state law. The unanimous decision comes in a case from Portsmouth, Va., where city detectives seized crack cocaine from a motorist after arresting him for a traffic ticket offense. David Lee Moore was pulled over for driving on a suspended license. The violation is a minor crime in Virginia and calls for police to issue a court summons and let the driver go. Instead, city detectives arrested Moore and prosecutors say that drugs taken from him in a subsequent search can be used against him as evidence."
“The article goes on to describe the specifics of the Supreme Court decision, with the deciding opinion written by judge Antonin Scalia, and then concludes by reporting that Moore was convicted on a drug charge and sentenced to 3 1/2 years in prison. The Virginia Supreme Court ruled that police should have released Moore and could not lawfully conduct a search. State law, said the Virginia Supreme Court, restricted officers to issuing a ticket in exchange for a promise to appear later in court. Virginia courts dismissed the indictment against Moore. Moore argued that the Fourth Amendment permits a search only following a lawful state arrest."

From the looks of things, only a revised, simplified and updated US Constitution, one that would be produced by a new 21st Century Constitutional Convention, will fix problems like this. After all, should that motorist have had crack cocaine on him when he was pulled over? Of course not, and I do not condone what he did. But, should he have gotten three and a half years in prison for this offense? Clearly the sentence was out of proportion to the crime committed. Under a new Constitutional government, one that would ultimately replace the current federal bureaucracy, long-term treatment would be mandated by law rather than incarceration. When we do the math together, we find that treatment is always easier than incarceration, and the recidivism rate is lower as well.

Here are a few more recent victims of our militarized police departments:


SWAT teams were designed to deal with very violent individuals who represent a clear and present threat to the public. However, they are now being used to execute warrants on non-violent offenders and even those who have no prior criminal history at all. Turning our neighborhood cops into shock troops will do nothing but erode public confidence in the police and endanger the lives of innocent Americans. Recently, Boston´s police commissioner William Fitchet announced that the department´s Street Crimes Unit will begin wearing military-style black uniforms, to instill a sense of "fear." At last week´s city council meeting, police Sgt. John Delaney told council members that the black uniforms would send the message that officers were serious. Did someone declare martial law?

You have just read the first few pages of chapter 4 of my upcoming release, now just weeks away. This latest edition will be available in hard or soft cover, and as digital or audio editions. Visit my new author landing page at https://www.authorrevpauljbern.com

Posted by The Progressive Christian Blog at 9:26:00 AM