Has capitalism run out of gas? If so, greed is the reason.

Seven Reasons Why Capitalism Has Run Its Course
by Rev. Paul J. Bern 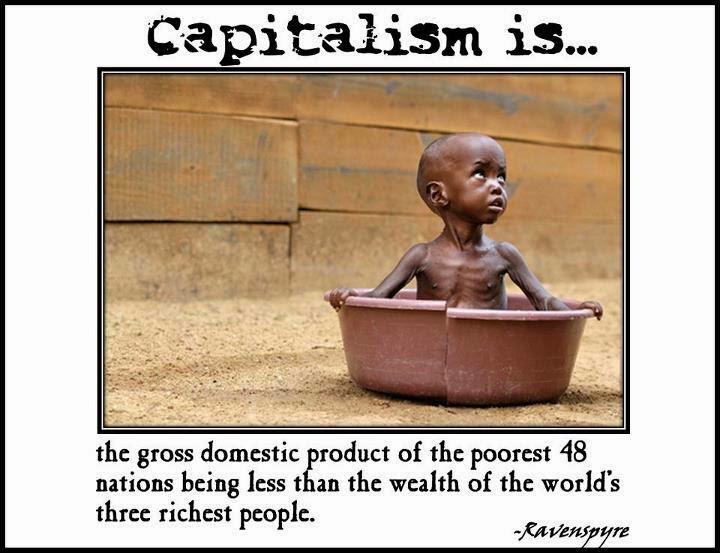 As world trade continues its anemic 1.2% average annual growth rate, politicians in most industrial countries, and particularly in the US, have an incentive to make exaggerated claims about the alleged ongoing economic recovery. The government wants us to think the Great Recession is over, and that we're on "the road to recovery," while the American people and other nations look on skeptically. The ugly truth is that more and more people have lost confidence in – and consequently no longer trust – the federal government. To make matters worse, 2014 turned out to be the year when the American public lost confidence and trust in law enforcement. The street protests in New York, Chicago, L.A., Atlanta and elsewhere attest to the factuality of that mistrust. Below are seven important social phenomena that point to a more realistic economic and political outlook for 2015. Let's start where it matters most by beginning with the economy.


1) The central banks are clueless. The usual tricks that U.S. and European central banks such as the Federal Reserve use to avoid recessions are long-exhausted. Interest rates cannot get any lower, and they've stayed that way for the last several years. And because cheap money wasn't working, the printing press was turned up a notch or two, into what the U.S. federal reserve euphemistically calls quantitative easing – flooding hundreds of billions of dollars into the world economy, escalating an emerging currency war between the US, the EU and the UK on one side, against China, Russia and the BRICS countries on the other.

2) Trade war. For the global economy to grow, global cooperation is needed. But there are too many countries engaging in a bitter struggle to dominate foreign markets so that their own corporations can export. These markets are won by devaluing currencies (accomplished in the U.S. by quantitative easing), installing protectionist measures (so that a nation's corporations have monopoly dominance over the nation's consumers), or by war (a very risky but highly effective form of market domination).

3) Military occupation and conquest. This is the part where I can't help but question some people's faith in God, or sometimes the lack thereof. If we are going to continue to call ourselves a Christian nation, then our nation's leaders – the ones who have been elected to take charge of the course of America – are going to have to find a better way of dealing with America's global problems and adversaries than by arbitrarily killing people by the hundreds of thousands. Besides, don't they comprehend that endless foreign wars are a telling symptom of economic decay? And then there are the economic wars, starting with the domination of markets – every inch of them – which has lately become an issue of life and death importance. "Containing" economies like China and "opening" economies like Iran and North Korea become more urgent during a major recession, requiring brute force and creating further global instability in all realms of social life. There's got to be a better way of doing this! The problem here is that America is not relying on God!!

4) U.S. economic strength overstated. The most important consumer market in the world, the U.S., is a nation of nearly bankrupt consumers. After enduring prolonged periods of unemployment following the 2008 economic crash, the greater majority of America's middle class fell into poverty, with a good number still there today. Nearly thirty million Americans are unemployed or underemployed, while further job losses are certain, due to nearly every state's budget deficit (unless it's minimum wage jobs – there are plenty of those to go around). As if that weren't enough, the student loan bubble currently stands at $1 trillion dollars 'plus', proving that America's educational system is broken. States are now bracing for more painful cuts, more layoffs, more tax increases, more battles with public employee unions, and more requests to bail out cities. And in the long term, as cities and states try to keep up on their debts, the very nature of government could change as they have less money left over to pay for the services they have long provided. Capitalism's infrastructure is falling apart, and no one is doing anything about it. There's no money to fix it.

5) Bailout Capitalism. First it was the banks and other corporations that needed bailing out, and now it's whole nations like Greece and Spain. Western nations bailed out their banks by falling into the massive debt that they are now drowning in. Greece and Ireland have been bailed out once, Greece just got a second one just a month or two ago, and Portugal, Spain, and Italy are all works in progress. The entire European Union is being called into question as the Euro takes a beating in the bailout spree. If the EU is dismantled, the shock waves will quickly reach other economies.

6) Bailout repercussions. All western nations – including the U.S. and England – are grappling with their national debts. Rich bond investors are demanding that these countries drastically reduce their deficits, while also demanding that the deficits be reduced on the backs of working families, instead of rich investors. This is tearing the social fabric apart, as working and poor people see their social programs under attack. In Europe mass movements are erupting in France, Spain, Portugal, England, Greece, Ireland, Italy, etc. Social stability is a prerequisite for a recovered economy, but corporate politicians everywhere are asking much more than working people are willing to give. People everywhere are sick and tired of being broke.

7) The emergence of the 'radical right'. To deal with working people more ruthlessly, the radical right is being unleashed. In normal times these bigots yell furiously but no one listens. But in times of economic crisis like we're living in they're given endless airtime on all major media outlets. The message of the far right promotes all the rottenness not yet eradicated by education: racism, xenophobia, religious intolerance, violence, and a backward nationalism that fears all things "foreign." These core beliefs effectively divide working people so that a concerted campaign against the corporate elite is harder to wage. Meanwhile, labor unions, progressives, and other working class organizations are instead targeted.


The various reasons for capitalism's impending failure I have just elaborated on do not happen in a normal economic cycle of boom and bust. These symptoms point to a larger disease in the capitalist economic system, a disease that cannot be cured by politicians who swear allegiance to this deteriorating system and to the wealthy elite who benefit from it. To ensure that the economic system is changed so that working people benefit, the ones who do the real work every day to keep things moving, large-scale collective action is necessary based on demands that unite the majority of working people. What America needs is a massive job-creation program at the expense of Wall Street, no cuts to Social Security and Medicare, and a moratorium on home foreclosures. If the Christian community worked cooperatively with the unions in promoting these demands, working people could put up a real fight. After all, the Bible says, “The workman is worth his/her wages”.

Posted by The Progressive Christian Blog at 10:45:00 AM No comments: