Here In America, Justice and Mercy
Seem to Be In Short Supply
by Pastor Paul J. Bern
To view this on my website, click here :-) 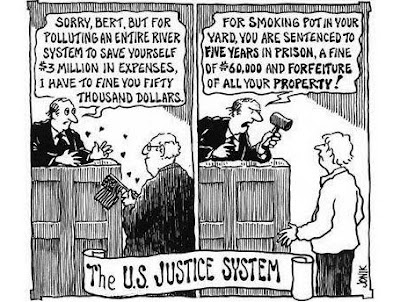 I did not bother watching the farce on TV this past week having to do with the US Judiciary Committee hearings on president Trump's nominee for the US Supreme Court. As my regular readers already know, I don't even subscribe to cable TV, nor do I have a satellite dish. I catch a little news, mostly local, on my old box TV that I'm still using. I guess I'll continue to use it until it dies of old age, which could be anytime now even though it still plays very well. The state of our federal government today is a lot like my old 20 inch Sony “Trinitron”. It still works okay, and from time to time it actually works quite well. But on stormy days, or if there are any low-flying aircraft close by, it interferes with my incoming signal. So it is with our current federal government, and our state governments are no better. During times like these, when the future of our country is at stake, interference with it in all the wrong forms is getting all the wrong results.

Don't get me wrong. Dr. Ford's testimony during the Judiciary Committee's hearings this week was compelling by all accounts. I don't care to get into the he-said-she-said debate regarding the allegations of sexual assault. As I wrote last week, all of these allegations past and present prove that the United States is a really corrupt and immoral country (thank you all for all those responses!). For anyone interested, you can find last week's message right here. But that's just what's on the surface. What lies underneath is pride, avarice, pole-vaulting ambition fueled by desires for revenge for past offenses – whether real or imagined – and what I would describe as a visceral and primal mind-set of competitiveness. Judge Kavenaugh was attacked mercilessly by his critics, together with their own agendas. But then again, so was Dr. Ford for much the same reasons. So what does all this prove? If nothing else, it proves we have become a country full of sex maniacs and alcoholics!

What was completely lacking throughout this past week's hearings was a sense of fairness, justice, and especially mercy. Everyone was in full attack mode from the time they all walked in the door and took their seats, like a predator stalks its prey. Yet if you asked any one of them whether they believed in Jesus or not, the overwhelming majority of them would say they did. OK, then here's a few quotes from our Lord and Savior regarding this week's happenings in Washington from Matthew chapter 5: “ 6) Blessed are those who hunger and thirst for righteousness, for they will be filled. 7) Blessed are the merciful, for they will be shown mercy.” Again in verses 9 - 10 he said, “ 9) Blessed are the peacemakers, for they will be called children of God. 10) Blessed are those who are persecuted because of righteousness, for theirs is the kingdom of heaven.”

Based on what I've heard and read about this past week's confirmation hearings, there is little righteousness to be found these days in Washington, DC. Instead, we evidently have an entire city of people who are constantly jockeying for position inside the Beltway, the majority of whom are apparently engaged in all kinds of deviant sexual behavior. Instead of governing as they were elected to do, most (but not all) of these people are engaging in a bed-hopping contest with one another. Hearing and reading about all this fills me with dismay. Writing about it makes me ashamed of my country, and that's an uncomfortable place to be. As for myself, I long for the day when I am finished being filled with righteousness by the Lord as it says in verses 6 – 7. That righteousness that Jesus spoke of does not come by man's or women's efforts, no matter how great. It comes from a willingness to step aside, from within ourselves, and swallow our pride as we abdicate control over our destinies and surrender them to Jesus Christ. Jesus is the very personification of the righteousness we all seek.

“Blessed are the merciful, for they will be shown mercy.” When women are sexually assaulted, it is done without mercy. When women and children are abused by the head of that household, it is similarly done without mercy, otherwise it can no longer be called abuse or assault. When the Constitutional rights of the American electorate are rapidly being evaporated, as it is currently happening throughout the land, it too is being done without mercy. But we as a faith-based Christian people (never mind denominational differences, or even whether you attend church or not) are charged with the responsibility of showing mercy, kindness, gentleness and sober judgment in order to set a good example for everyone else, especially the children. We are responsible for doing everything Jesus said to do, to the very best of our abilities, so help us God! Show mercy to your fellow man/woman during your lifetime here, and God will reward you. Show your fellow man/woman no mercy during this life, and when it is over, God won't show you any mercy, either!

“9) Blessed are the peacemakers, for they will be called children of God. 10) Blessed are those who are persecuted because of righteousness, for theirs is the kingdom of heaven.” Do you want to spend your life fighting all the time? Or if you're like a few people, are you the type of person who becomes a cop or a soldier so they can legally shoot people? Don't they really enjoy putting those 'bad people' back in their place? Those are NOT peacemakers, people, they are predators! But if you promote yourselves as peaceful (excluding matters of self defense), loving, tender, compassionate, gentle and teachable, this is all we have to do to make our world a much better place. And, if you've ever been unfairly targeted for your Christianity, or for other matters that are spiritually important, or for taking a stand for something good or against something evil, rejoice and be glad, Jesus said. The prophets of old who came before you experienced the same kinds of persecution and rejection, so you're right in their league.

Allow me to serve up one more good quote about justice and mercy, this time from the prophet Zechariah. “ 8) And the word of the Lord came again to Zechariah: 9) “This is what the Lord Almighty said: ‘Administer true justice; show mercy and compassion to one another. 10) Do not oppress the widow or the fatherless, the foreigner or the poor. Do not plot evil against each other.’ 11) But they refused to pay attention; stubbornly they turned their backs and covered their ears. 12) They made their hearts as hard as flint and would not listen to the law or to the words that the Lord Almighty had sent by his Spirit through the earlier prophets. So the Lord Almighty was very angry.” (Zech. 7: 8-12) We as a nation are, by and large, completely ignoring verses 9-10. My country that I've always loved and always will has nonetheless become a country devoid of any trace of justice, mercy and compassion, and the fault lies squarely with America's leadership.

Anytime we devolve into a bunch of high-rolling wannabe aristocrats that verbally abuses one another just because they get to be on TV, I would say we as an American people have sunk to a new low. Yes, I stand against those who sexually assault or otherwise abuse innocent people, but I'm also absolutely against one nation waging warfare against another. Most of all as far as this week's message is concerned, I'm also against those who lie under oath on international television, as well as those congressional representatives sitting on the Judiciary Committee in Washington who abuse their authority for profit. I vehemently stand against men who abuse women, as well as the other way around.

But there are plenty of good things that we can all stand for. Justice, mercy, fairness, the absence of bias in our decision making, and the possession of much empathy and compassion towards others regardless of who they are, where they come from or what color their skin is – it is these things that are required of us by our Maker. Because, you see, that's precisely what He put us here for. It is our purpose for living. The very reason for our existence is to take care of one another, just as God is taking good care of each and every one of us as I write these words. God has made us wonderfully and with utmost perfection! He puts the breath in our lungs, he has put the blood in our veins, and he causes the heart to pump all 5 quarts of it with the greatest of vigor. That way we will never lack the energy or ability to care for one another. That's what Jesus meant when he said, “A new commandment I now give you: Love one another.” (John 13: 34)

“Do not oppress the widow or the fatherless, the foreigner or the poor....” See that, all you “patriots” and “conservatives”? Don't pick on widows, orphans, foreigners or the poor! God is serious about this – leave 'em alone!! Suppose the United States sustained a nuclear attack – who would do this is a matter of mere speculation, but what if we had to leave the country to save our own lives and that of our families? Wouldn't we expect a little justice, fairness and (above all) mercy instead of being greeted as unwelcome guests if we were to become refugees in, say, Canada or Mexico? Of course we would! And being treated with hatred and contempt wouldn't make any of us feel very good, now would it? “Love thy neighbor as thyself”, that's what Jesus taught, isn't it? OK, so all you immigrant haters and so-called “patriots” or “white nationalists”, what do you think God will say to you when it comes your time to stand before him? Think about that for a minute. You'd better!!

“ 11) But they refused to pay attention; stubbornly they turned their backs and covered their ears. 12) They made their hearts as hard as flint and would not listen to the law or to the words that the Lord Almighty had sent by his Spirit through the earlier prophets. So the Lord Almighty was very angry.” If God was so angry back in Zechariah's time because the people lacked compassion and simply did whatever they wanted, what do you think God would say to America's leaders, and those who voted them into office, today? I'll tell you what I know for sure, it won't sound pretty.
Posted by The Progressive Christian Blog at 12:01:00 PM