The Violence That Rocks American Society:
How We Did It to Ourselves
by Pastor Paul J. Bern
For better phone, tablet or website viewing, click here :-) 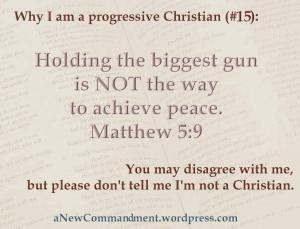 To start off this week's commentary, I will spare you the cliche's about the constant presence of things that money simply can't buy. Hopefully everybody knows that, or if not you sure do now. We find ourselves living, however, in an unbelievably corrupt society that is governed in large part by criminals, although there are plenty of good people mixed in with that. We also live in an unbelievably violent society where we have mass shootings that occur with alarming regularity. I even got a passport last winter, just in case of possible civil war, another thing being disseminated on social media with similarly alarming regularity. If a 2nd US civil war breaks out, or if martial law is ever declared, I'm leaving (for how long I can't say)! In between it all is the verbal machine gun fire of commercial after commercial. I got so sick of all that I terminated my cable TV subscription 6 years ago.


The Bible, our owner's manual provided by God, has plenty to say about violence, and how it will escalate here in these last days. Jesus himself prophesied: “Do not suppose that I have come to bring peace to the earth. I did not come to bring peace, but a sword. For I have come to turn 'a man against his father, a daughter against her mother, a daughter-in-law against her mother-in-law – a man's enemies will be the members of his own household.' Anyone who loves his father and mother more than me is not worthy of me; anyone who loves his son or daughter more than me is not worthy of me; and anyone who does not take up his cross and follow me is not worthy of me. Whoever finds his life will lose it, and whoever loses his life for my sake will find it.” (Matt. 10, verses 34-39) Now hold that thought for a minute.


Is it any surprise, then, that we find ourselves surrounded by so much violence? OK, now here's an important question – why are there so many violent people? Saying they are simply evil, or that they were abused themselves as children, are simplistic answers and therefore insufficient. There can be no question that we find ourselves in an epidemic of mental illness, but that is a topic I'd rather leave to trained mental health professionals. But I also think we are living in times of great deprivation that is being experienced by the vast majority of people. During these times of extreme inequality, a lot of people are feeling like they've been cheated, abused, disenfranchised and impoverished. That's because they have been subject to all of the above. So I am not at all surprised that some people snap under the pressure.


“Do not suppose that I have come to bring peace to the earth. I did not come to bring peace, but a sword.” When Jesus walked the earth he was called, among other things, “the Prince of Peace” (Isaiah 9: 6). But that was 2,600 years ago. That was then, but those words of our Lord and Savior concerning the future are about to become spoken in the present tense. When Jesus returns, he will not come as the Lamb of God as he did before. He will come as a conqueror on a white horse (see Revelation 19: 11)! “Whoever finds his life will lose it, and whoever loses his life for my sake will find it.” Those who pursue wealth, success and fame can achieve them all, but the price tag may turn out to be unbearable. Hollywood has countless such examples, as does the pop music scene. It all amounts to organized crime.

Wall Street itself operates as a criminal syndicate devoted to the theft of that to which it has no rightful claim. It then bribes politicians to shield the looters from taxes on their ill-gotten gains and to eliminate social programs that cushion the blow to those they have deprived of a secure and meaningful means of livelihood. In the big picture, the Wall Street one percent has divided society into a looter class that controls access to money and a producer class forced into perpetual debt slavery – an ancient institution that has allowed the few to rule the many for thousands of years. The immense burden imposed on the 99 percent by public debt, consumer debt, mortgage debt, and student loan debt is the outcome of the Wall Street assault on justice and democracy, while maintaining a system of enforced inequality. The resulting desperation and loss of social trust account for the many current symptoms of social disintegration and gun violence.


I grew up in America during a time when we took pride in being a middle-class society without extremes of wealth and poverty. In part, we were living an illusion. Large concentrations of private wealth were intact and systemic discrimination excluded large segments of the population —particularly people of color – from participation in the general prosperity. The underlying concept that the good society is an equitable society, however, was and still is valid. And from the 1950s to the 1970s the middle class expanded. But not any more. Extreme inequality as perpetuated by Capitalism, is both a source and an indicator of serious institutional failure and social pathology. Economic and social inequality are detrimental to human physical and mental health and happiness – even for the very rich.


Relatively equal societies are healthier on virtually every indicator of individual and social health and well-being. In highly unequal societies, the very rich are prone to seek affirmation of their personal worth through extravagant displays of excess. They easily lose sight of the true sources of human happiness, sacrifice authentic relationships, and deny their responsibility to the larger society at the expense of their essential humanity. At the other extreme, the desperate are prone to manipulation by political demagogues who offer oversimplified explanations and self-serving solutions that in the end further deepen their misery. Governing institutions lose legitimacy. Democracy becomes a charade. Moral standards decline. Civic responsibility gives way to extreme individualism and disregard for the rights and well-being of others, up to and including gun violence.


Within a political debate defined by the logic of living systems, such measures are simple common sense. Within a political debate defined by conventional financial logic, however, they are easily dismissed as dangerous and illogical threats to progress and prosperity. So long as money frames the debate, money is the winner and life is the loser. Wall Street interests would have us believe that the best way to save Earth’s ecosystems is to put a price on them and sell them to wealthy global investors to manage for a private return. Rather than concede the underlying frame to Wall Street and debate the price and terms of the sale, North American indigenous leaders, the Occupy and 99% Movements, and environmental groups drew on the ancient wisdom of indigenous peoples to challenge the underlying frame. They declared that as the source of life, Earth’s living systems are sacred and beyond price as a creation of Almighty God's. They issued a global call to recognize the rights of nature, which I view as a form of obedience to God.


As of this writing, we Americans are still not doing enough about our plight to settle this peacefully. Hey, we haven't even learned to live peacefully with each other! After all, the only remaining alternatives are anarchy and revolution, and I have been convinced for many years that one of these will be the ultimate outcome. I'd much rather have the latter than the former. But, there is no magic bullet quick fix. We must re-frame the debate by bringing God back to the forefront and turning the prevailing wealth hierarchy on its head. The rights of nature must come first, because without nature, humans do not exist. As living beings, our rights are derivative of and ultimately subordinate to the rights of Earth’s living systems, all of which are God's creations. Human rights come before property rights, because property rights are a human creation. They have no existence without humans and no purpose other than to serve the human and natural interest. Corporations are a form of property and any rights we may choose to grant to them are derivative of individual property rights and therefore properly subordinate to them.


The step to a peaceful human future and a clean and balanced environment requires that we acknowledge life, not money, as our defining value, accept our responsibilities to God for one another and to nature, and bring to the forefront of its Creator. Replacing cultures and institutions that value money more than life with cultures and institutions that value life more than money is a daunting challenge. Fortunately, it is also an invigorating and hopeful challenge because it reconnects us with our true nature as living beings and offers a win-win alternative to the no-win status quo. The only two alternatives are revolution (when all other means are exhausted, and we are pretty much at that point now) or human extinction.
Posted by The Progressive Christian Blog at 12:17:00 PM