Fall of the American Empire: Part One
(Excerpt from chapter 6 of “The Middle and Working Class Manifesto” by Rev. Paul J. Bern)
The fourth updated edition of this book will be available this fall 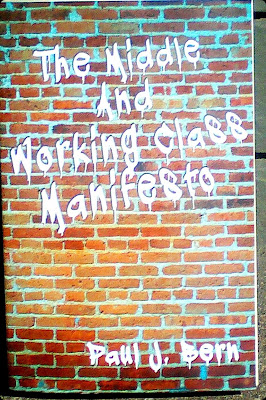 In my previous postings I have outlined the problems of the US middle class, and how it is slowly being obliterated by the top 1% of the financial pecking order. The end result of this is that the country is being ruined, literally from the inside out. Our only hope remaining is to protest, boycott, strike against and Occupy America every way we can. Not with an armed revolt, but a rather massive amount of organized passive resistance.


The plight of the American people is that we are experiencing the systematic confiscation of our wealth and prosperity, and with it our way of life. Many of our jobs, our savings and pensions, our housing and transportation, and our access to higher education and preventative health care, are evaporating before our eyes, and this social injustice will continue unabated until we as a united people rise up as one in a chorus of peaceful revolution. I am convinced that if we do not, the next battle front being entrenched by the top 1% will be against our very freedom. In fact, this latest round of class warfare being thrust against us has already begun, and it has become known as the 'prison-industrial complex'. Record numbers of people, many of whom are either wrongfully convicted or are harmless substance abusers in need of professional help, are being locked up systematically, and the process is slowly getting worse.


The United States, according to the New York Times, has 5% of the World's population and 25% of all people incarcerated on the planet! Currently in the United States, one in every hundred people are in some kind of incarceration. Incarceration is very big business in the United States. Private corrections companies such as Wackenhut, CCA and others charge either the States or the federal government from $65 to $160 a bed per night to warehouse all these people. In 2007, according to the National Association of State Budgeting Officers, states spent $44 billion in tax dollars on corrections. That is up from $10.6 billion in 1987, a 127 increase adjusted for inflation. With money from bonds and the federal government included, total state spending on corrections last year was $49 billion. By the end of 2018, the report said, states are on track to spend an additional $65 billion.


The United States ranks first in prison population. Where did we get all of these criminals? Well the answer comes from the reckless and costly War on Drugs, the new prohibition that makes convicts and criminals of those who are classified in more enlightened countries such as Portugal and the Netherlands as having a medical problem. In 2000 there were 74,276 drug related prisoners. In 2008 it was 95,079. In 2010 it was 99,205. As of 2017 that number is estimated at 56% and it continues rising unabated). We house those with substance abuse problems with professional criminals. What will we get when these people are released after serving an average 55 months in prison?


This is what capitalism has done. People are now profiting by locking up other human beings. And the longer people are are locked up, the more profitable the industry is. Should we be proud that we imprison more people than any nation on Earth? Have we outsourced so many industries along with their factories that we need a giant prison system to keep people employed (or locked out of the job market – literally!)? If we continue to allow such a disproportionate number of poor and minority citizens to be locked up, released without rehabilitation, and locked up again, modern slavery will continue to thrive. We are supporting a modern form of slavery if we do not, at the very least, lessen the punishment for drug offenses, do away with the unconstitutional "three strikes" laws and offer education and rehabilitation as an alternative to incarceration. If we retrain prisoners by paying for their vocational education, we give them a trade. If we simply incarcerate them and release them, all we get are more prisoners.


Remember, this “prison-industrial complex” is bought and paid for, and brought to you by the same "government" that has brought you: The FBI, the DEA, the BATFE, the only Atomic Bombs ever used in War, Three mile Island, Area 51, the Bay of Pigs invasion, Vietnam, Watergate, Iran Contra, Ruby Ridge, ID., Waco, TX., Grenada, Nicaragua, Somalia, FEMA disasters and the Patriot Act. Oh, and let's not forget the wars in Iraq I and II, and now Afghanistan, Yemen, Somalia and Libya. All of this has been and will be done in the name of “National Security”. When the American war machine finishes its conquests overseas to “acquire” Middle Eastern oil, the final step will be to bring the troops home so the “new world order” can turn their weapons on its own people. The final step, you see, will be the conquest of the Untied States. Only then will the domination and control over everything and everybody by the top 1% be secured by the Shadow Government and the New World Order.


American citizens have a patriotic duty to dissent and to speak out when it is apparent their government is creating policies and taking actions that are in conflict with the best interests of the people and the laws of the land. The right of patriotic dissent has been a part of America since those days that brought us our independence. Yes, anyone can and should exercise the right to dissent when the situation requires it. We find ourselves living in a world where the next terrorist attack could kill everyone in your city or town, where the cost of fuel could skyrocket into the stratosphere with the next conflagration in the Middle East or the next natural disaster, and where you can become the next crime statistic on less than a moments notice.


And as all these things are taking place, the solution being offered by your government, your political and economic system, your media outlets and even your churches are for more security by way of less individual freedom and personal liberty. I think it is high time that “we the people” rose up to challenge this erroneous notion that security is preferable to freedom. And I think it's high damn time to correct the perception of the top 1%, making them understand that people are not expendable, nor are we a commodity to be exploited. We need to take matters into our own hands if we hope to get anything done, and we need to directly confront our terrible economic situation if we hope to get things moving back in our favor. The system is broken, and it's up to us to either fix it, bypass it, or replace it altogether. Anything less amounts to slavery.

The end result of the hijacking of our political and economic system by the top 1% is that the country has been run into the ground. In my opinion, and based on quite a bit of on-line research and a library of saved Internet postings and articles, it is severely damaged but it may be repairable. In the meantime, here is what America is faced with in the short term.
Seven Reasons Why Capitalism Can't Recover Anytime Soon


Six more startling facts about the decline of the USA.

[1] In 2000, USA was ranked number one in average wealth per adult. In 2017, USA fell to seventeenth.
[2] USA has lost approximately 42,400 factories and 32 percent of manufacturing jobs since 2000. In 1959, manufacturing represented 28 percent of economic output. In 2018, it represents 11 percent.
[3] Manufacturing employment in the U.S. computer industry is lower in 2018 than it was in 1985.
[4] America's trade deficit with China increased 300 percent in last ten years,which could eventually cost half a million jobs this year alone. Half a trillion dollars yearly leave America due to trade deficit.
[5] US 15-year-olds do not rank in the top half of all advanced nations in math or science literacy.
[6] The United States has the third worst poverty rate among all the advanced nations.
So where are US resources being directed? Towards war, of course!

Some people think the Federal Reserve banks are United States Government institutions. They are not Government institutions. They are private credit monopolies which prey upon the people of the United States for the benefit of themselves and their foreign customers; foreign and domestic speculators and swindlers; and rich and predatory money lenders..... But I don't believe for one instant that this will be the end of the line for the USA. The country itself, the land and its people, its infrastructure, the commercial structures and all the houses, most of the businesses and everything related to them, will all still be here. It will be up to us, the working people of this country (employed or not) who keep things going, to change the system from the bottom up.....

Order the softback direct from the author ($18.95) at www.pcmatl.org/books-and-donations (scroll to bottom of page)

Order the Kindle version ($7.95) at https://www.amazon.com/s/ref=nb_sb_noss?url=node%3D154606011&field-keywords=the+middle+and+working+class+manifesto

Kobo, B&N Nook, Sony, Fire, plus all Apple/Mac devices!! Please order those versions from this link -- https://www.smashwords.com/books/view/587473
Watch the video at http://youtu.be/VZguRDJmCqc

Posted by The Progressive Christian Blog at 11:53:00 AM