The MLK Holiday and the State of Racism in America

The Hijacking of a Dream:
Reclaiming Rev. Dr. King’s Legacy
by pastor and published author Paul J. Bern
To view this in any browser, click here :-) 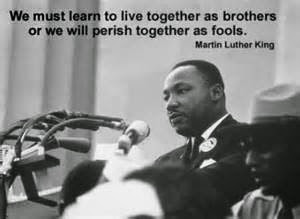 As we celebrate another Martin Luther King holiday, America needs to perform a re-assessment of what this memorial holiday truly means to all of us. On August 28, 2011, the dedication of the Martin Luther King, Jr. National Memorial took place on the National Mall in Washington DC. Having the dedication of this memorial on the 48th anniversary of the March on Washington, was clearly a symbolic gesture — paying homage to one of the many defining moments in the great civil rights leader’s life. However, the corporate contributors of this event, along with many of the politicians that were in attendance, were and are symbolic themselves. They are symbols of everything Dr. King was, and would be, opposed to if he were alive today. These charlatans and hucksters know very well of this fact, which is exactly why they, together with the mainstream media and an ever-shrinking segment of prejudiced Americans of all colors and races, continue to desperately try to reshape the image of Dr. King. If these people have their way, Dr. King and his legacy will stand for nothing more than a superficial image. They fervently wish to recreate him into someone they can feel more comfortable with. This is why most children can only recite one quote in relationship to Dr. King —“I have a dream.” Our kids and many of their parents don't even know the whole message.


Rev. Dr. Martin Luther King, Jr. stood for much more than what mainstream America has methodically reduced him to. In fact, if he were alive today, many of the corporate war mongering politicians, including President Trump, would be vilifying Dr. King as if he were some crazed angry black man. This is why we will never hear the likes of Barack Obama quote Dr. King when he referred to the US government as “the greatest purveyor of violence in the world today”. Dr. King said those powerful and honest words on April 4, 1967 at Riverside Church in New York City, exactly a year before he was assassinated. Nearly five decades later, the US government is still the greatest purveyor of violence on earth. You can bet that the following quote will not be read at all in King's memory:

“As I have walked among the desperate, rejected, and angry young men, I have told them that Molotov cocktails and rifles would not solve their problems. I have tried to offer them my deepest compassion while maintaining my conviction that social change comes most meaningfully through nonviolent action. But they ask — and rightly so — what about Vietnam? They ask if our own nation wasn’t using massive doses of violence to solve its problems, to bring about the changes it wanted. Their questions hit home, and I knew that I could never again raise my voice against the violence of the oppressed in the ghettos without having first spoken clearly to the greatest purveyor of violence in the world today — my own government. For the sake of those boys, for the sake of this government, for the sake of the hundreds of thousands trembling under our violence, I cannot be silent.”


After reading Dr. King’s “Beyond Vietnam — A Time to Break Silence” speech, anyone still thinking that he would be in approval of what this current administration is doing in places like Pakistan, Egypt, Syria, Libya and Afghanistan, need to rethink their conclusions. Dr. King was much more than simply a man who was anti-war; he was a man who stood for peace and social justice. He was truly a man of principles and convictions, which is why he was unafraid of speaking truth to so-called power. Remaining silent, as so many gutless politicians and celebrities do today, was not an option within Dr. King’s conscience. And because of this, he was routinely targeted by the US government, by way of the Federal Bureau of Investigation and devils minions such as FBI founder J. Edgar Hoover.


The American empire’s military-industrial complex is a vastly profitable behemoth that must be fed a steady diet of wars in order to maintain its existence. Those who threaten the existence of this killing machine become expendable. Dr. King’s outspokenness against not only the Vietnam War, but also the military industrial complex, secured his status as a target. Dr. King’s “crime” was that he dared to challenge the conscience of a nation entangled within the web of an imperialist war throughout Southeast Asia. Among other things he said, “A nation that continues year after year to spend more money on military defense than on programs of social uplift is approaching spiritual death.” Which one of the political frauds, or entertainers, in attendance at the dedication to Dr. King’s memorial took such a courageous stance in solidarity with Martin Luther King, Jr.? None, that's how many. Zero.


Over a trillion dollars have been expended on these foreign wars since 2001 —- while people in the US are all losing their homes to foreclosures, school systems are being de-funded, and 40,000 Americans die each year due to a lack health insurance. That's more people than all who died in auto accidents last year. If Dr. King’s statement is true then America’s spirit must be on life support — needing an end to its profligate defense spending as part of a multi-tiered remedy for rehabilitation. Dr. King knew very well about the US government’s record of going into countries, whose governments refused to be obsequious to their addiction to other nation’s resources, and then destabilizing them by waging war, by assassination of leaders, or both. These are, in fact, the kind of immoral acts of war that Rev. Dr. Martin Luther King, Jr. would be completely opposed to, along with the wars in Afghanistan and Iraq before that. His life should give us ample reason to come to this conclusion, and only this conclusion. However, how many children in America know this? Dr. King’s image has been reshaped by some amoral adults as well as by other adults who have been purposely mis-educated.


In regards to people of color, especially poor people, Dr. King had a knack for placing their living conditions within the context of institutional racism and its impact on their communities. In 1968, not long before his assassination, Dr. King said, “It is incontestable and deplorable that Negroes have committed crimes; but they are derivative crimes. They are born of the greater crimes of the white society.” The great civil rights leader said those words within a speech he gave to his staff at a SCLC meeting in Frogmore, South Carolina as he was preparing them for the Poor People’s Campaign. His commitment to black people – and poor people in general – was the polar opposite of the last several presidents, who seemed at times to excel at marginalizing those demographics while catering to their corporate and military bosses.


In the same “Beyond Vietnam” speech, Dr. King gave a prescient warning when he said, “When machines and computers, profit motives and property rights are considered more important than people, the giant triplets of racism, extreme materialism, and militarism are incapable of being conquered.” Today in 2018 much of the world is suffering from the impact of America’s insatiable hunger for global domination. The USA’s runaway military industrial complex continues to take lives away from innocent civilians in places like Venezuela, Afghanistan, Syria, Yemen, Somalia and Libya, to name just a few. The American military industrial complex creates carnage abroad while preventing Americans from having things like a world-class single-payer health care system. In 2018 institutional racism remains a disease that destroys the lives of people of color in America by way of ruthless police brutality, enforced economic inequality and intentionally unequal school systems — to name a few. Also in 2018, runaway capitalism is imposing economic terrorism on countless people and their rapidly disintegrating communities. Dr. King’s words are surely more relevant now than ever before.


The dedication of the Martin Luther King, Jr. Memorial was assured to be a most superficial event replete with superficial politicians and luminaries when it was held back in 2013. The organizers of this event and their corporate cronies were promoting and selling everything from expensive hotel rooms, sponsorship opportunities, to high priced exhibitor space. In essence, they were “honoring” Dr. King by not embracing his legacy of social justice, but by financially capitalizing on his name. There were no speeches of ending America’s imperialist wars, like Dr. King did. Anyone with such a message trying to get on that stage would have been swiftly removed by security. There were no speeches about destroying institutional racism in America. Instead, the lie of America being a post racist country was and still is bandied all around. Don’t expect any talk about waging a war on poverty — after all, some of the sponsors of this event are in fact large multinational corporations (such as Wal-Mart, Monsanto and numerous others) that benefit from destroying local businesses while dissuading their workers from unionizing.


Dr. King once said, “Our lives begin to end the day we become silent about things that matter.” He also famously said, “Injustice anywhere is a threat to justice everywhere.” Ending institutional racism in America, eradicating poverty and homelessness, tearing down the US prison-industrial complex by ending the drug wars, and stopping the US military’s destructive and endless wars – these are the things that really matter. They matter so much that life and death hinge upon each injustice. It is obvious that we cannot expect Democrats or Republicans to vociferously break their collective silence about the cauldron of social injustices that have been brewing in America for quite some time — that job must be ours, starting with the clergy like myself, since Congress and the President refuse to do any such thing. We must raise our collective voices and speak out against them and stand up for justice. As the 2018 King Holiday comes and goes, this is the greatest way we can honor the legacy of Dr. Martin Luther King, Jr.!


Posted by The Progressive Christian Blog at 1:59:00 PM