What If We Didn't Need Money?

(excerpt from "Occupying America: We Shall Overcome" by Rev. Paul J. Bern)

Watch the video at http://youtu.be/Z20l9ohORN4 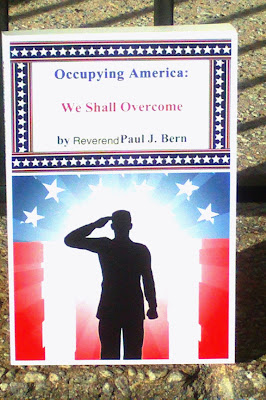 What are these law enforcement folks protecting to begin with? The assets, infrastructure and personal privacy and security of the top 1%, that's what! The problem with that is the top 1% regard everything in sight as theirs, as if all the people in the lower income brackets – the other 99% – didn't deserve one stinking thing. In short, its all a game of acquiring the most stuff, the biggest collection of material goods of one kind or another, the fastest or most luxurious car, the most powerful truck and the biggest house. And for what? If one of us should die tomorrow, he or she can take absolutely none of it with them. As Rev. Billy Graham used to preach, “nobody ever saw a hearse pulling a U-Haul trailer behind it”. It's all temporary, left behind when we are dead and gone, as all of us eventually will be, including me. It's what we leave behind that counts.

Maybe we should ask ourselves – if you haven't done so already – what kind of legacy do we want to leave? Not someone who did great things in the sight of others or who made a great fortune, but someone who took care of the needs of the people on a case by case basis. Not someone who is lauded with praise by men and women, but one who seeks the praise and approval of Almighty God as I and others like me do. I love giving some homeless guy a couple of dollars, paying an elderly widow's electric bill to keep it from being turned off, donating a used computer to an inner city school kid who needs one, and never mind their skin color either. Performing volunteer work, giving generously to your church (it doesn't have to be financial aid, there are many ways to help), sponsoring a hungry kid overseas, or adopting one here at home are the things people remember about us after we have passed, and so will God. We are to be leaving behind the things that people remember about us long after we are gone, and they must be positive things that build people up, not negative things that tear us down. We are to be contributors, being sure to give wherever possible and not living just to see how much we can earn, or even take. Takers are losers who leave holes in time.

What if we didn't need money at all? What if we had an alternative way to buy things without using traditional cash, checks or plastic? What if we didn't have to work at all, or maybe not nearly as much? Using profit as a mechanism for the control of liquid assets by and for the top 1% when the overwhelming majority of Americans have no access to those assets is obviously an economic barrier that keeps the remaining 99% of us in a bare subsistence mode. This is clearly unethical – moreover, it is discriminatory and so its constitutionality is questionable at best! Eliminating the need for money instantly wipes out poverty while putting the 99% in a favorable position to have all their basic needs met, such as shelter with a minimum of 500 square feet per resident, clean and safe food and drinking water, electricity and internet access. The 3D printing technology already in use – and still being developed – can be used to manufacture much of what else we will need. The replacement of money, and of the work that is necessary in order to earn it, are already being accomplished by computers and robots.

Technology has eliminated jobs across the board on an alarming scale – from secretarial positions to auto workers. The resulting crisis is compounded by our culture's deep denial of the basic problem. I'm old enough to remember the '60s and '70s when so many pundits described the coming glories of the "cybernetic age." Then computers would at last liberate us, they promised, from the drudgery of 9 - 5 jobs. Back then the worry was, what would we do with all that leisure time? That leisure time has since proven frustratingly elusive. Instead, most of us are working harder than ever as our employing firms "downsize." Alternatively, we're pounding the pavement looking for non-existent jobs to replace those that have been "outsourced" to Asia somewhere. Moreover, so many of the "jobs" available to the more recently laid off labor force are extremely low-paying to a humiliating degree (such as the current and pathetic minimum wage of $7.25 hourly here in Atlanta; in rural Georgia it's a paltry $5.25!). In the end, these “jobs” are nothing more than useless make-work projects that are completely unnecessary, and in some cases even destructive. Things like weapons manufacturing, the military itself, many (but not all) telemarketing companies, most insurance companies and – above all! – Wall Street jobs connected with financial speculation. None of these occupations are truly productive. And naming them as I have represents only the tip of the iceberg.

Still other jobs can easily be eliminated by technology. Think of what happened to Encyclopedia Britannica that didn't see Wikipedia coming. Think of the music industry recently involuntarily "downsized" by file sharing. And what about newspapers, currently in crisis because of alternative media websites like Democracy Now!, The Corbett Report, Alternet, Rick Hunter, Op-ed News and Truthdig, among others? Similarly Web-based education (sometimes called "distance learning") is having its own impact on higher education as brick-and-mortar campuses find themselves headed for financial oblivion. Even the oil industry is sun-setting. Imagine what that means for an entire economy and lifestyle absolutely dependent on oil. New technology will soon turn every building into an energy power plant. Surplus energy will be stored in hydrogen cells. And the energy produced will be shared person-to-person across a "smart grid". Think of the jobs that will be eliminated as a result – including those required by the energy wars that will be rendered superfluous. We are kept from discussing it only because our "drill, baby, drill" politicians have their heads so firmly stuck in the tar sands of Canada and the oil fields of Saudi Arabia. Consequently, the U.S. economy is being left in the dust.

There is an enormous amount of productive work crying out to be done across our country. The U.S. infrastructure is crumbling at an alarming rate. Green technologies in general, particularly the “smart grid”, high speed rail and public transportation are the most obvious needs. The number of potential jobs connected with them is in the millions. But there are not nearly enough green jobs to replace the ones that have been eliminated by technology and those that should be discarded because they are unsustainable, environmentally destructive and morally deficient.

So what should be done about all of this? Share the work! None of us has to work that hard unless we want to. Thanks to new technologies we could work four-hour days or three-day weeks, or for only six months a year, or every other year and still make a living wage. We could retire at 40. And this is possible world-wide. And how to pay for all of this? For starters, cut back the military budget 60%. That alone would make billions of dollars available every day just in the U.S. alone Tax the rich and the corporations – those who make up the "1%" that has ripped off the U.S. working class on an unprecedented scale over the last 30 years and more. (Remember the 91% top-level tax bracket that was in place following World War II? We could reinstate that!) Share the excess wealth or risk losing it. Boldly restructure the economy. Embrace new technology's promise along with the life of leisure and volunteer service that it offers. It is all now within our grasp. Since the government is unwilling or incapable of the restructuring I am calling for, it is up to us, “we the people”, to get the job done ourselves. Worker-owned co-ops and factories, little 1 or 2 person micro-businesses, and non-profits would make up the greater part of the business world of tomorrow.....

Get yours directly from the author at www.pcmatl.org/books-and-donations ($9.95) OR

Buy the print version on Amazon by clicking here :-)

Get it in audio format at https://www.amazon.com/s/ref=nb_sb_noss?url=search-alias%3Daudible&field-keywords=occupying+america%3A+we+shall+overcome

Watch the video at http://youtu.be/Z20l9ohORN4

Posted by The Progressive Christian Blog at 1:26:00 PM