The pathetic state of racism and inequality in America

Why God Hates Inequality
by Pastor Paul J. Bern
To view this on my web site, click here :-) 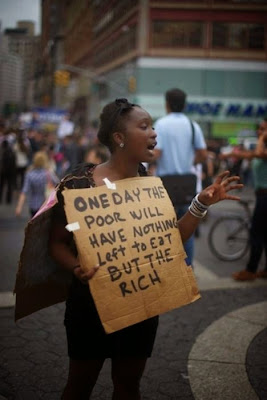 In a continuation of my ongoing efforts to bring authentic Christianity into the 21st century, which includes a personal relationship with Jesus Christ combined with an opposition to injustice and inequality, I wish to bring to your attention a newspaper headline posted a couple of months ago on TheRoot.com by Monique Judge, an on-line acquaintance of mine. The headline reads, “#Flint: An Update and a Reminder That It Has Been 1,196 Days Since the Mich. City Had Clean Drinking Water”. Some selected highlights are as follows:


“....Many government officials have been charged with crimes in the subsequent fallout, but the city is still without a permanent solution that provides an ongoing source of clean water for the people who live there. When the parties were unable to come to an agreement in June, the Michigan Department of Environmental Quality filed a lawsuit against the city after the City Council refused to approve a long-term water contract with the Great Lakes Water Authority, out of Detroit. The suit alleges that the city is endangering public health....“There are some helpful things happening in the meantime. Mayor Karen Weaver’s office told the Daily Progress that since March 2016, about 2,700 homes have had old water lines replaced through the FAST Start Initiative, a program with a goal of replacing nearly 20,000 lead-tainted water lines in the city by the year 2020....According to the Minnesota Star Tribune, Michigan State University, which received a four-year, $14.4 million grant from the Centers for Disease Control and Prevention, announced Tuesday that it will be using the first installment of that grant to establish a registry of Flint residents who have been exposed to lead since the crisis began in 2014. It will use the $3.2 million to connect people to programs that can help minimize the health problems associated with lead exposure, which include effects on brain development in children. The Environmental Protection Agency announced Tuesday that it will forgive $20.7 million in water debt that the city of Flint incurred through the Drinking Water State Revolving Fund....Flint has come a long way, but there is still much more work that needs to be done. With help and support like this from federal, state as well as local entities, Flint will indeed bounce back. Too bad that help hasn’t come in the form of potable water dripping from the faucets.”


Formerly middle class people, plus a whole lot of poor folks including people of color, are having their most basic rights taken away by a runaway government and their out-of-control police departments. Access to running water is a fundamental human right. Period. End of story. To forcibly remove – by turning off or forcibly cutting off – anyone's access to running water is a crime as far as I am concerned. The Bible says in the Book of Proverbs chapter 29, verse 7, “The righteous care about justice for the poor, but the wicked have no such concern”. That's God's take on poverty in a nutshell. “The poor you will always have”, Jesus said not long before His crucifixion, “but you will not always have me”. The poor are humankind's responsibility, starting with the churches and its volunteers. Shelter falls into the same category as water – it too is a basic human right. Even the earliest humans from 100,000+ years ago slept in caves, long before the invention of written language, and before the discovery of fire and the wheel. Moreover, I wrote in my 2011 book, “The Middle and Working Class Manifesto”, which is still available in paperback from this website (or as an e-book on Kindle from here), that people everywhere have “The right to affordable housing and the fundamental right to shelter regardless of economic status. We have a responsibility as a civilized society to end homelessness.”

Here in the city of Atlanta where I live, there are lots of boarded up and abandoned houses (there's plenty out in the suburbs, too, but most of those aren't on the bus line). There are also a lot of homeless people, mainly because Georgia is one of those states whose minimum wage is still stuck at a paltry $7.25 an hour. Any way you slice and dice it, a single person who makes minimum wage and works 40 hours per week can't afford to rent a one-bedroom apartment anywhere in Atlanta, even though the most basic 1-bedroom rents for 'only' about $450-500.00 monthly. So there are a slowly growing number of squatters who are living in these abandoned houses, nearly all without the benefit of water or electric hook-up. Others live in their vehicles, if they're lucky enough to still have one. When the police catch them, and they do so routinely, they are taken directly to jail. OK, now let's review this. The cops catch some luckless squatter who is camped out in a house that nobody wants. Since that person is considered to be a trespasser under Georgia law, and since the majority of the squatters are also usually black, they are taken immediately to a city or county jail where it will cost the taxpayers upwards of $60.00 a day to detain them.


So, evidently there are some who think it's better to spend $60.00 a day to house otherwise harmless petty criminals than it is to let them sleep in abandoned structures at night where they are bothering no one. No one seems to care about the fact that incarcerating these people is an unnecessary burden on the taxpayers. I understand that they're trespassing on someone's property, but if that is something that must be enforced then why is the structure abandoned and in disrepair? The answer, brothers and sisters, is greed. The property owners, many of whom live out of state or overseas – and who want nothing to do with these properties because they owe back property taxes on them – will not hesitate to press charges against some poor homeless man, or a homeless single parent with small children, for sleeping on a front porch on a rainy night. They can't be there themselves, so they make donations to the local Fraternal Order of Police, or “lobby” the local Congressional representative, and the trespassing laws are rigidly enforced as a result.


The Bible has plenty to say about this. For example, in Exodus chapter 23, verses 6-9 it says, “Do not deny justice to your poor people in their lawsuits. Have nothing to do with a false charge and do not put an innocent or honest person to death, for I will not acquit the guilty. Do not accept a bribe, for a bribe blinds those who see and twists the words of the righteous. Do not oppress an alien; you yourselves know what it is like to be aliens, because you were aliens in Egypt.” In Psalm 9 verse 8 it reads: “He will judge the world in righteousness; he will govern the people with justice.” Psalm 106 verse 3 says, “Blessed are they who maintain justice, who constantly do what is right.” There are lots and lots of examples like these that make abundantly clear that God stands for justice, fairness and equality, such as Zechariah chapter 7 verses 8-10, and I quote: “And the word of the Lord came again to Zechariah; 'This is what the Lord Almighty says: 'Administer true justice; show mercy and compassion to one another. Do not oppress the widow or the fatherless, the alien or the poor. In your hearts, do not think evil of each other.'”


Does America deny justice to poor people? Given the fact that many nonviolent offenders who get caught up in the “criminal justice” system wind up languishing in jail for months or even years waiting for a court date because they can't post their bail bonds, I would say absolutely America denies justice to poor people. “Do not accept a bribe, for a bribe blinds those who see and twists the words of the righteous.” For those who didn't realize this, these are the very words of God as dictated to Moses during the ancient Israelite's 40 years in the desert. Today in our government at the state and federal levels, we have exactly the opposite. Only today, we give them the innocuous-sounding name “lobbyists”, which excuses nothing! It's all still a bunch of bribery! “Do not oppress an alien; you yourselves know what it is like to be aliens....” All Americans are descended from first-generation immigrants at some point in their past, however distant that may be. You can already see where I'm going with this, and I've brought it up before – the extremely harsh treatment of undocumented foreign nationals, the majority of whom are people of color, by the majority of American citizens. It's all race-based and everyone knows it deep down in their hearts. It's time to call a spade what it is – racial prejudice – and get it over with. There I just wrote it, or said it if you're watching this on You Tube, for all to see and hear. It's way past time for America to confront its issues with racial prejudice and get over all this nasty racist stuff. There will be no racists in heaven, all you Christians with your stinking Klan robes! You cannot love God while despising his creations! So forget about it!

“This is what the Lord Almighty says: 'Administer true justice; show mercy and compassion to one another. Do not oppress the widow or the fatherless, the alien or the poor.” As before, this is exactly what the USA, an allegedly “Christian nation”, is doing as I write this. Does the US show “mercy and compassion”? On the contrary, we have the largest percentage of people in jails and prisons-for-profit of any nation in the world. America is first in incarceration, but when it come to education America truly sucks, and people are just getting things off the ground with ways to change that. But until this occurs, it is time for the US middle and working classes to put our collective feet down and say ”no more”. Let there be no mistake, America is ripe for mass civil disobedience, even for outright revolution. Moreover, as I just proved, this is all based on the Bible, not some ideology. The conditions and circumstances in which the middle and working classes find themselves has become truly intolerable!


Personally, I am a very patient and thoughtful man. I work hard each day to be slow to speak and quick to listen because I know from experience that there is much wisdom to be derived from living my life this way. But by the same token, I am a Christian man and Web evangelist who stands against social injustice and economic inequality, and whose patience is at its end. Just as surely as Jesus preached against the political and religious establishment of His day, in like manner I will do the same in the present day in order to emulate the man I regard as my personal Lord and Savior. So, if you truly care about the deteriorating state of our nation, if you are really concerned about the issues that we are faced with collectively as a people, and if you want to make a stand against social and economic injustice – and since it's in all our best interests to do so – you owe it to yourself to stand up in the face of power and say, “That's it! You're done!!” You know why? Because if Jesus Christ were to return this very day, that's what He'd say. And the ones who are having the homeless thrown in jail for trespassing on their dilapidated properties would be the first ones Christ would send straight to hell.
Posted by The Progressive Christian Blog at 12:44:00 PM