Now available in print, digital and audio formats. Offered on Amazon or from our website

Watch the video at http://youtu.be/5Bxi7x0nUc0 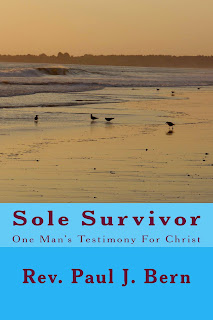 Restoration by God, Driven Away by Man

I finally got out of jail on the night of December 17th, 1999 after an agonizing 4 month wait to get my court case done and over with. The main thing I remember about that night was how incredibly cold it was. I had been arrested in early fall near the end of September, and all I had on were casual slacks and a polo shirt. After treating myself to a full sit-down dinner at an all-night restaurant across the street from the jail, I was forced to make my way on foot to the nearest place that I was sure would be open all night, which was the community hospital on the suburban east side of Atlanta about 2 or 3 miles away. So off into the freezing cold I went as I hiked over to the hospital. The two main things that motivated me to get there were the lack of outer clothing and the fact that I was already a nervous wreck from having spent those 4 months in jail without the benefit of my bipolar medication. The clinic there – and it barely qualified as such – were giving me 2 different medications that I had never heard of. They did just barely work, but they were a poor substitute for my regularly prescribed 'meds'. I recall getting to the ER about 3:30 AM that morning. To make a long story short, I spent the next 13 days at an inpatient clinic right down the street from the hospital. While I was there I got stabilized on my regular medications, and I managed to get back in touch with the district manager where I had been working when all this mess first started. I had contacted him when I was first brought to jail, trying to raise some bail money. They could not help me with that, I was told, but my job would be kept open for me until I was released. They stayed true to their word and rehired me upon my release. That Wang Global district manager's name was James Dean. God bless you, James, wherever you are.

I checked out of the hospital on a blustery Friday afternoon, and I started back to work the following Monday morning. This gives me pause with regards to God's eternal mercy, the loving way He chastises us but then restores us – but not always immediately, because His timing is always perfect. Did you ever notice that about God? His timing is always letter-perfect and never too late. Had that gone any other way, when I got out of jail I could have immediately become homeless, wandering the streets without a coat when the outside temperature was around 35 degrees, and having lost the new job I had just acquired 5 months before. Instead, and by the grace of God alone, I had landed on my feet and I was able to miraculously pick up where I had left off before all the trouble started. I give Jesus all the credit for my success, and I give him all my praise, thankfulness, and honor!

I worked that entire year, right up until Christmas time. That's when they laid us off. But it was the way it was done that bothered me the most. One day a month or two beforehand, a 15-passenger van pulled up and parked in front of the office, and these 15 technicians from the Philippines get out and enter the office conference room. The door gets shut behind them, and it isn't until the next day that the rest of us found out they were there as our replacements. The senior techs, and by this point I was one of them, were instructed to train one of them apiece. One of them said it was unfair, and he refused to train any of them, saying he could make his job last at least a week longer by not having a replacement trained and ready to go. To no one's surprise, he was fired on the spot, right where he stood, and it didn't seem to matter to him. To this day I regard this as a good example of what can and should happen to racists in the workplace.

I spent the next six months searching like crazy for a replacement job. Unfortunately, the dot-com financial crash was happening right around this time, and the computer/IT industry had pretty much came to a standstill. So I did what lots of other technical professionals like myself were doing at the time: I went back to school to get my Microsoft certification. I already had my degree, plus an A+ certification and two Dell certifications, so for me the Microsoft certification made sense (remember, this was back in 2001). But instead of making me more marketable like I thought, what few job offers I did have seemed to evaporate. All together I went for over 14 months without drawing a paycheck. My saving grace during this time was that I had substantial savings, otherwise I would surely have been homeless by that time. But homelessness escaped me when I used the small pickup truck that I owned at the time to go to work as a private contractor for a courier company. I had to take a substantial pay cut from the $35.00 per hour I had been making as a Dell service contractor, but by now my savings balance was nearly depleted. By dodging homelessness the way I had, I thought I had dodged a bullet, but I had only delayed the inevitable for a few more years. I will have more to say on that in the next chapter.

This book is available on-line from the author at www.pcmatl.org/books-and-donations (free shipping, tax deductible) for $12.95.

Watch the video at http://youtu.be/5Bxi7x0nUc0 Thanks so much!
Posted by The Progressive Christian Blog at 1:44:00 PM