Written in a journalistic, expose' style, this nonfiction book chronicles the ongoing demise of the US middle class and what pastor Bern calls, "the ticking time bomb of inequality". This prophetic 2011 book, now in its 4th edition, predicted the American people's demand for free health care, free higher education for everyone without qualification, an end to the Drug War that includes prison reform, repealing the federal income tax, and the need for a $15.00 per hour minimum wage. This Christian-based book (yes, it has Bible quotes) is a must-read for everyone who thinks America is headed in the wrong direction. 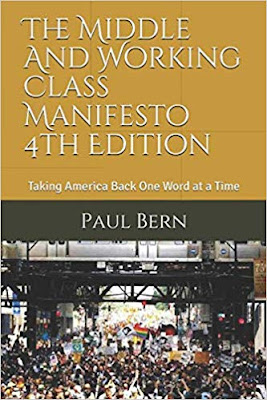 It is now clear to see that voting various senators and congressional representatives into and out of office, depending on who the incumbent candidate is, stopped working a long time ago. The system is broken down from age and misuse. No matter who is elected to office, they are only puppets being manipulated and controlled by corporate America and all their armies of lobbyists, who work behind the scenes in conjunction with the US military-industrial complex, the federal and state prison systems, and the so-called “war on drugs”, which is really another form of class warfare against minorities and the poor. In point of fact, every economic problem present in the US today that I have already reported on in this book, plus the war on drugs, are actually civil rights issues disguised as social or economic problems. This has been done deliberately and with sinister intent by the same cancerous rogue elements of the US government and intelligence establishments that were behind the Kennedy and King assassinations of the 1960's.

So what can we do if our peaceful revolution somehow doesn't succeed? What will happen if things stay the same as they are into the foreseeable future regardless of our best intentions? A couple of things I can definitely tell you will happen is that prices for all the basics will continue to rise until the cost of rent or a mortgage payment, a tank of gas, a weeks worth of groceries and our utility bills get so expensive that US workers' and retirees' monthly incomes fall well short of their minimum monthly expenses. And that is not counting the skyrocketing cost of higher education, medical care and prescriptions. What will happen if people can't buy fuel to get to work?

But if all that still doesn't work, and if our situation as a united people continues to gradually get worse as is now the case, what will we do? What if we run out of options? We will need to have a plan 'B' in place in case of a worst possible scenario, and armed revolt is out of the question for reasons which I have already stated earlier in this book (although it must not be ruled out in matters of self-defense). Is there a way to simply retreat, to walk away and refuse to be a part of this rigged political and economic system that has us all enslaved, and does this kind of action have a legal precedent? The encouraging answer to both these questions is an enthusiastic yes. The solution is something borrowed from the pages of history, and I am talking about secession.

Kirkpatrick Sale of the Middlebury Institute recently observed that there is presently ”more attention being paid to secession than any time since 1865″ and predicts that “one of the American states will vote for its independence in the next 10-15 years.” Neo-secessionist sentiments are frequently stereotyped as a characteristic exhibited primarily by “right-wing extremists.” Yet there are serious reasons why moderates and progressives should consider secession. Among the most compelling reasons why concerned Americans should consider dissolving the U.S. into multiple nations, regions, or city-states are:

The majority of the U.S. population resides in the 75 to 100 largest urban, metropolitan areas. If these areas – New York, Washington D.C., Los Angeles, San Francisco, Portland, Chicago, Miami - were all independent city-states or micro-nations along the lines of Monaco, Luxembourg, or Singapore, genuine progressives would be in a much superior political position than at present. The major U.S. urban areas tend to be the most diverse culturally, racially, ethnically, and religiously. It is also in these areas where the majority of racial minorities, LGBTQ people, persons with counter-cultural values, and those with left-leaning political views tend to be concentrated. The majority of the unfortunate persons fed into the prison-industrial complex also originate from the large cities.

It would be immensely easier for independent city-states of this kind to enact, for instance, single-payer health care, legal same-sex marriage, stem cell research or a genuine living wage. Likewise, it would be much more possible to decriminalize, regulate and tax drugs, prostitution, gambling and other “consensual crimes” along the lines of New Zealand, Portugal, or the Netherlands at present. Such changes would severely weaken and undermine the police state and prison-industrial complex. The likely weakening of corporate power following the demise of federal and state corporate welfare would also provide a more level playing field for activists to take on landlords, developers, bankers, and other plutocratic interests on a municipal and regional level, and perhaps initiate economic alternatives like cooperatives, collectives, communes, land trusts, and so forth.

OK, so we know there is legal precedent for secession, except that if this is accomplished in the early 21st century we must do so peacefully instead of shelling Fort Sumter like they did back in 1861. But can the act of secession be maintained once it has been initiated? Once the seceded territory has been set up, organized, and its boundaries set, is there legal precedent to set up its own Constitutional legal system, to print its own money or introduce some other medium of exchange, and so to be free and independent from the rest of the US? Once again the encouraging answer is that there is legal precedent for this very thing that dates back to the early years of our country, and this legal precedent is called nullification. An example of this was introduced in the South Carolina General Assembly back in 2010 was House Bill 4509 (H4509), which would make law that “no public official of any jurisdiction may require registration of purchasers of firearms or ammunition within the boundaries of this State.” No caveat for regulations under the commerce clause. No caveat for types of firearms either. This bill says NO to all gun registrations – period. The principle behind such legislation was nullification, which has a long history in the American tradition.

In the Kentucky Resolutions of 1798, Thomas Jefferson wrote in response to the hated Alien and Sedition Acts: “The several states composing the United States of America are not united on the principle of unlimited submission to their general government”, and, “where powers are assumed [by the federal government] which have not been delegated, a nullification of the act is the rightful remedy: that every State has a natural right in cases not within the compact, to nullify of their own authority all assumptions of power by others within their limits: that without this right, they would be under the dominion, absolute and unlimited, of whosoever might exercise this right of judgment for them”.

Posted by The Progressive Christian Blog at 11:17:00 AM