To Stop Gun Violence in America,


We Must Acquire “the Mind of Christ”
by Pastor Paul J. Bern
To view this on my website, click here :-) 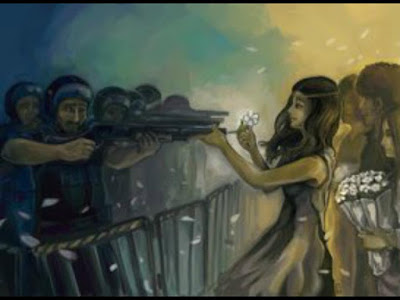 I could start by writing at length how sick and tired people have become of America's gun violence problem. I'm skipping all that. The news media is already filled with the opinions of those who, in the long run, matter little if at all. I'm skipping the psychoanalysis too. Don't hand me all the utterances of the do-nothings who spend their days pointing out problems without making any effort at coming up with any solutions. You all know the ones I'm talking about, and I don't mean everyone reading this, either – not by a long shot. I'm talking about all the TV and radio pundits who make their living by agitating and provoking people. I know the gunman in the Thousand Oaks, California mass shooting had Post Traumatic Stress Disorder. I suffer from PTSD myself, but the source of my disorder is from growing up in an abusive foster-care situation rather than from the battlefield. There are a lot of people who have PTSD, but none of the rest of us has arbitrarily decided to go out and mow down a dozen or more people. I can't imagine doing such a thing myself. I find the very thought revolting.

They can call whatever they do whatever they want. I call it 'violently anti-social behavior'. And yet the majority of these agitators on radio and TV are church goers. That's the part that drives me nuts – from the vantage point of the pulpit, that's what I'm seeing – that people today would rather fight each other than help each other. Soon after, the acquisition of such argumentative mindsets devolves into violence because intolerance devalues others to the point that simply killing a few is somehow OK. Taking a life – any life – just because one has deemed it to be necessary, is never OK. We have lost sight of the fact that life is sacred because it comes from sacred origins, whose name is the Almighty God.

The Bible does have some things to say about this. The apostle Paul wrote about this in his letters to the Corinthian churches, and I quote: “6) We do, however, speak a message of wisdom among the mature, but not the wisdom of this age or of the rulers of this age, who are coming to nothing. 7) No, we declare God’s wisdom, a mystery that has been hidden and that God destined for our glory before time began. 8) None of the rulers of this age understood it, for if they had, they would not have crucified the Lord of glory. 9) However, as it is written: 'What no eye has seen, what no ear has heard, and what no human mind has conceived — the things God has prepared for those who love him' — 10) these are the things God has revealed to us by his Spirit.” (1st Corinthians 2: 6-10)

The first thing we can derive from verse 6 is that we should not wait on the government to fix our problems because the government lacks the wisdom to fix anything as it currently stands. There it is, right there in the Bible. God holds the solutions we seek, not government. As for the rest of us, it's not so much that we lack the wisdom, it's that we can't seem to agree on how to go about ending gun violence in America. We cannot reach a consensus because many of us refuse to acknowledge the existence of a Higher Power. Never mind the Christian concepts of a risen Christ and an Almighty God for just a minute – and all my Christian brethren please bear with me for a moment, because I'm seriously going somewhere with this today. It is an indisputable fact that there are sources of Higher Power in the universe. A refusal to acknowledge or remain in touch with this Higher Power – the forces of Light that we call “God” – leaves a vacuum in the human heart that causes the forces of darkness to take its place. You are either from the Light, as I am, or from the Darkness, which is all that is negative. It is evil, which is the power of Darkness that never penetrates the Light unless it is allowed to, that is the motivator for America's gun violence problem.

But the evil I'm writing about isn't psychological, it's not mental illness, nor is it pathological at all. The source of this evil is spiritual. People who give in to evil and so carry out horrible evil such as this epidemic of mass shootings do so because they have made a conscious effort to put their Higher Power – just in case they profess disbelief in the existence of God – out of their lives. When you put the Light out of your life, the Darkness inevitably takes its place. Those who do not believe in Spiritual forces make themselves all the more vulnerable to it. “9) However, as it is written: 'What no eye has seen, what no ear has heard, and what no human mind has conceived — the things God has prepared for those who love him' — 10) these are the things God has revealed to us by his Spirit.” The apostle Paul was quoting Isaiah 64: 4 as if to say, if only you will stick with God, his reward for you will be greater than anyone can imagine. Never give up on God, and He'll never give up on you. And even if you do give up, God sticks with us anyway because that's how much he loves each of us. Even if we're in sin, God will still stick with us – but only for so long, if you get my drift.

Paul clarified this still further further down in this same passage when he wrote: “13) This is what we speak, not in words taught us by human wisdom but in words taught by the Spirit, explaining spiritual realities with Spirit-taught words. 14) The person without the Spirit does not accept the things that come from the Spirit of God but considers them foolishness, and cannot understand them because they are discerned only through the Spirit. 15) The person with the Spirit makes judgments about all things, but such a person is not subject to merely human judgments, 16) for, 'Who has known the mind of the Lord so as to instruct him?' But we have the mind of Christ.” (1st Corinthians 2: 13-16) Now I ask you, how can we continue to have the “mind of Christ” when we have our minds focused on who we can take vengeance upon and kill? Never mind whether we think they “deserve it” or not. I am simply trying to emulate Paul by “explaining spiritual realities with Spirit-taught words.”

America's mass shooting epidemic is a symptom of a country that is turning to the forces of Darkness. If America was still attuned to the forces of the Light like she used to be, there would have been no more than a handful of these mass shootings before they would have been brought to an abrupt halt. Granted, when it comes to all these shootings, America's gun laws clearly need to be strengthened, that is true. But the ultimate responsibility lies with the individual, as Paul wrote, “The person without the Spirit does not accept the things that come from the Spirit of God but considers them foolishness, and cannot understand them because they are discerned only through the Spirit. The person with the Spirit makes judgments about all things, but such a person is not subject to merely human judgments....” OK, so if any given person systematically rejects the things of God, or of their Higher Power, and/or refuses to recognize the authority thereof, then is it any wonder that such people wind up doing such ungodly things as mass murder? It should come as no surprise at all.

All right, so we can safely conclude that those who act out on violent impulses, or who cannot or will not keep their angry feelings in check, to the point where they cannot help but hurt or even kill others – long term incarceration is the only thing that will stop such people. And that's assuming they survive being arrested, and many choose not to. Let's not forget there are some who, as the novelist John Milton put it, “....would rather rule in hell than serve in heaven.” Actually for me, it's the other way around. Keeping in mind that I would rather serve forever in heaven than roast forever in hell is what keeps the forces of Darkness out of my heart, mind and soul. In effect, I and others like me “have the mind of Christ”. Not the person, you understand, but the mindset of the man, the Savior and Redeemer. Only Christ gave his life for you and for me – Jesus Christ the Son of God and no one else. Only the forces of the demonic take lives, they never give anything.

And so in closing, it is vitally important that we all take on “the mind of Christ”. No one can be just like our Lord and Savior because only Jesus lived a sinless life – none of us even comes close to that. But we can overcome our bad natures – especially the propensity to kill – by keeping the “mind of Christ” tucked inside our brains as we go about our daily routines, and as we meet and work with all kinds of people. Some of them are good, some are evil, and still more simply don't care. As long as they're getting their usual, that's all they worry about. They couldn't care less about anyone else but themselves. Although the killers are awful enough, and dangerous enough, it's the ones who don't care who do the most damage of all. That's because the only way evil can flourish is for cold and uncaring men and women to look the other way.

Posted by The Progressive Christian Blog at 2:15:00 PM