Our presidential primaries are a farce, they've been that way for a long time, and it's up to us to change it 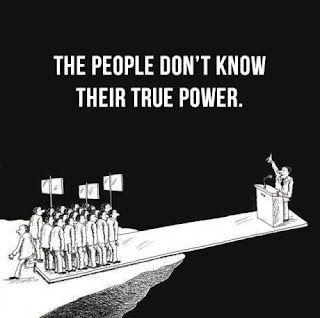 It has come to my attention lately that this summer's presidential conventions are likely to turn into an all-out brawl. On the Republican side you have Donald Trump's supporters vs the “anybody but Trump” brigade, while on the Democrat side we find Hillary Clinton's supporters lined up against those who are for Bernie Sanders. Caught in the middle are the American people, who really have no voice at all anymore unless we step up collectively and change this for ourselves. Take a look around you and you will find no one standing in line behind any of us eagerly waiting to do us a favor. Life isn't like that, so just forget about it. If we want change, and the American people most definitely do, we're going to have to put it in play ourselves. Let the American people take the field, then, and let us play this government for a bunch of suckers just like they did us! Give them a taste of their own medicine and see how they like that!

But the ugly truth of the matter is that the US electoral system has been exposed once again as being rigged to the point of being completely fraudulent. The discrepancies between the final vote tabulation and the exit polls are huge, with several being in excess of 10%. The New York primary was a classic example, where Bernie Sanders won 50 out of the 62 counties that are in New York state, while Hillary won the other 12. And yet Hillary Clinton was declared the winner by 6 percentage points? This is just one example, but you get the idea (what happened in California almost a week ago is another good example). Dr. Ron Paul says the American electoral system is rigged to keep “independent thinkers” from succeeding. “I see elections as so much of a charade,” the former Texas congressman said during an April 11 appearance on RT America’s “The Fishtank.” “So much deceit goes on. I’ve worked on the assumption for many, many decades, that whether there’s a Republican or a Democrat president, the people who want to keep the status quo seems to have their finger in the pot and can control things,” he said in the interview. “They just get so nervous, though, if they have an independent thinker out there — whether it’s Sanders, or Trump or Ron Paul, they’re going to be very desperate to try to change things.” He suggested that the 2016 election is “a lot more entertainment than anything else” because none of the candidates “have answers” to modern political problems. Even so, Paul interprets the success of these outsider candidates as a sign that “more people are discovering that the system is all rigged and voting is just pacification for the voters and it really doesn’t count. I don’t think there’s an easy way out for the establishment or the parties,” he noted, explaining that Democrats and Republicans would both rather risk “further alienation of the people” than allow a candidate to succeed who could shake up the system. “I was upset about it but didn’t want to waste too much energy being angry because this is the way the system works,” he said. “It’s a rotten system.”

People have to understand that the United States is NOT a democracy. It never has been, and it never will be unless we change it ourselves. The United States is also not the constitutional republic it was originally founded as either, and hasn’t been since America became a corporation that serves an oligarchy with the Act of 1871. An oligarchy is defined as a form of government in which power resides in the hands of a small number of elites within a society. The United States of America is a corporation and an oligarchy that serves a political system that lacks anything resembling true legitimacy. The political system it serves is a handful of elite families and institutions using crony politicians such as Hillary Clinton to do their bidding. In what is known as the “Act of 1871,” the Forty-First Congress of the United States officially sold out our nation to the Illuminati (or the “global bankers” if the term global banker suits you better), because the U.S. had reached unsustainable levels of debt and something had to be done (notice a pattern?). The following is from the post titled, Proof: US Congressional Record Says US is Actually a British Crown Colony Run By NWO: “The 'Act of 1871' essentially destroyed our republic, and replaced it with the Corporation of the United States. Something not taught in any history books, and certainly not taught by common core, is that the original Constitution drafted by the Founding Fathers, was written in this manner: “The Constitution for the united states of America.” The Act of 1871 altered that, and the newer version reads: “THE CONSTITUTION OF THE UNITED STATES OF AMERICA.”” The 1871 version is the Constitution’s “corporate replacement,” and what might seem to layman like no more than mere semantics is actually a far, far bigger deal.

Save the “Conspiracy” nonsense for another time. The Act of 1871 can be downloaded and read for yourself. What Congress did by passing the Act of 1871 was create an entirely new document, a constitution for the government of the District of Columbia, an incorporated government. This newly altered Constitution was not intended to benefit the Republic. It benefits only the corporation of the United States of America and operates entirely outside the original Constitution. Instead of having absolute and unalienable rights guaranteed under the original Constitution, “we the people” now have “relative” rights or privileges. One example is the Sovereign’s right to travel, which has now been transformed (under corporate government policy) into a “privilege” that requires citizens to be licensed. By passing the Act of 1871, Congress committed TREASON against the American people who were Sovereign under the grants and decrees of the Declaration of Independence and the original Constitution. Not only that, but the Bible has some scripture that fits this very closely, such as Proverbs chapter 14, verse 31: “He who oppresses the poor shows contempt for their Maker, but whoever is kind to the needy honors God.” Deuteronomy 15: 4 says “there should be no poor people among you.....”, and again in Isaiah 61: 1 it reads, “The Spirit of the Sovereign Lord is upon me because the Lord has anointed me to preach good news to the poor. He has sent me to bind up the brokenhearted, to proclaim freedom for the captives and release from darkness for the prisoners”. Who among us is “the poor and the needy”? Just about everybody these days. Are we being oppressed? Certainly, because we no longer have any say in our government, and because our Constitutionally guaranteed freedoms are being taken away!

This is a dangerous trend, and it must be reversed if what is left of our country is going to be preserved. Of course, election irregularities are nothing new in America. There was the Bush/Gore debacle of 2,000, which exposed the US electoral system as being like something out of the 1950's. But these same people are the ones who brought us endless wars in the 21st century, Waco Texas in 1993, Iran Contra from the 1980's, the Watergate break-ins of the 1970's, and the assassinations of the Kennedy brothers and Rev. Dr. King from the 1960's. So, you see, we will never know who really won the presidential primaries, and it may not matter anyway. Today's American political candidates are selected, not elected. The whole electoral, economic and political systems are rigged against us in favor of the top 1%, or maybe the top .01%. At any rate, it's looking more and more like “we the people” will have to stop this by force. As I see it, we have run out of options. After all, was it not Jesus himself who said, “I have come not to bring peace, but a sword.” Got yours?
Posted by The Progressive Christian Blog at 1:50:00 PM