Is Human Equality Ordained By God? Can It Stop the Violence?
By Pastor Paul J. Bern 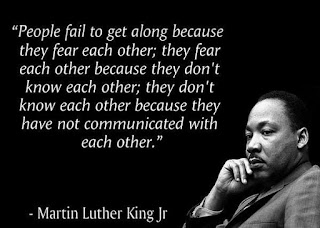 Since the dawn of time itself mankind has been plagued by violence. The first instance can be found in the Bible in the book of Genesis. Cain and Abel both offered sacrifices to God, and God accepted Abel's offering but rejected Cain's because Cain offered his sacrifice with an impure heart. So Cain became jealous of Abel and killed him in the first murder in recorded history. As time marched on and the earth's population grew, tribes and nations rose up against each other and took prisoners who then became slaves, and the industry of human trafficking was born as master lorded it over slave, marking the advent of mass inequality. This social and societal scourge of inequality grew exponentially throughout the ages, with the beginning of the end of slavery marked by the end of the American civil war of the 1860's, the war with more American casualties than any other. Today the institution of slavery, human sex trafficking and smuggling of illegal aliens continues to thrive, and all are a form of social injustice as far as I am concerned. As such they are absolutely immoral.

In the late 1700's, the French revolution was happening in Europe at about the same time that the American Revolution was unfolding in colonial America. These two separate but related events in human history marked the beginning of the modern concept of human equality. The signing of the Emancipation Proclamation by Abraham Lincoln heralded the next significant step towards social equality as it criminalized slavery. But nothing more occurred for another 80 years, until the US military ended racial segregation within its ranks in 1948. At about the same time, Mahatma Gandhi initiated a new equality movement in India that resulted in India's independence from Great Britain. By the 1950's the US civil rights movement began gaining momentum, led by Rev. Dr. Martin Luther King, Jr. Rev. Dr. King was, first and foremost, a minister of the gospel of Jesus Christ. It was from the Bible that he obtained much of his inspiration for the American civil rights movement, although he also used the US Constitution and the Declaration of Independence as frames of reference to add justification to the American social upheaval that he thankfully instigated. And so this week's sermon will highlight three passages from the Bible that Rev. Dr. King no doubt used for his own inspiration, and here is the first one.

“Our desire is not that others might be relieved while you are hard pressed, but that there might be equality. At the present time your plenty will supply what they need, so that in turn their plenty will supply what you need. Then there will be equality, as it is written, 'He who gathered much did not have too much, and he who gathered little did not have too little.'” (2 Corinthians 8: verses 13-15 NIV)

“...Your plenty will supply what they need, so that in turn their plenty will supply what you need. Then there will be equality...”. The apostle Paul, who wrote these words nearly 2,000 years ago, is saying that we are to be mutually beneficial to one another when it comes to our physical and/or material needs and wants. Under no circumstances is any one person or group to have significantly more necessities than any other person or group, nor may any one person or group acquire an excess of anything at the expense of any other. There is no reason other than pure selfishness for one person or group to have a surplus of food while another goes hungry. There is no reason for one to have plenty of clean clothes to wear while another is dressed in rags, or to have a warm coat while another has none, except that certain people find themselves excluded from any opportunity they could have to improve themselves, to aspire to be something or someone more than they currently are, just so others can have more. There is no reason other than pure selfishness for one person or group to have a roof over their head while another sleeps in their car, a tent or under a bridge. Even the cave men lived in caves!And in these examples I am only talking about basic necessities. When it comes to luxury items this line of reasoning applies even more so. With so much wealth in the world, especially with such a large percentage of wealth concentrated in the hands of relatively few people, I find it unconscionable to hoard too much wealth and material goods to ourselves while others less fortunate than ourselves go without. Remember what Jesus said, and it's in all four gospels. Don't take my word for it, go and read it for yourself. Jesus said, “It is easier for a camel to pass through the eye of a needle than it is for a rich man (or woman) to enter the kingdom of heaven”.


Material wealth is a distraction that takes our eyes and our focus off God. The more earthly goods we accumulate, the less we think about our spiritual needs. The less we think about our spiritual needs, the less we think about God. Prosperity, while it can be a good thing when it is in the right hands, is most often that which alienates us from God and from our spiritual selves. When our lives are over and we die, it is our souls that live on while our physical bodies get left behind. The more spiritual we were during our lives on earth, the greater our faith is in Jesus. Our eternity in heaven is directly proportional to our spiritual existence on earth, but too much emphasis on material gain and possessions neutralizes our spirituality. Remember what Jesus said when He taught the crowds that followed after Him, “What does it matter if a man gains the whole world and loses his soul?” In the very next book in the New Testament Paul makes additional comments concerning equality.

“You are all sons of God through your faith in Christ Jesus, for all of you who were baptized into Christ have clothed yourselves with Christ. There is neither Jew nor Greek, slave nor free, male nor female, for you are all one in Christ Jesus. If you belong to Christ then you are Abraham's seed, and heirs according to the promise.” (Galatians 3: verses 26-29 NIV)

“ But when the time had fully come, God sent His son, born of a woman, born under law to redeem those under law, that we might receive the full rights of sons. Because you are sons, God sent the Spirit of His son into our hearts, the Spirit that calls out, 'Abba, Father'. So you are no longer a slave, but a son; and since you are a son, God has also made you an heir.” (Galatians 4: verses 4-7 NIV)

All of humankind, then, are equals under Jesus Christ because God has made it so according to Scripture. It is therefore immoral, unethical and sinful to discriminate, prejudge, or to hold in contempt any other human being regardless of their race, nationality or ethnic origin, or because of their religious background and their faith (or the lack thereof), or because of their gender, age, or their marital, social or economic status, or sexual orientation or political affiliation. Any person who does any of the above things that I have just written is guilty of holding in contempt that which God has made, and by extension holds God Himself in contempt. And that is blasphemy in its highest form. The Bible teaches that blasphemy of the Holy Spirit is the only sin that God can't forgive. Any person who deliberately commits this sin will be eternally condemned when they die. I don't know about you, but condemnation is not in any of my future plans. As the prophet Jeremiah wrote, “As for me and my house, we will serve the Lord.”

Based on this Scriptural teaching which is the irrefutable Word of God, I know with certainty that any person who hates another for any reason is without excuse. The apostle John said, “Anyone who hates his brother is a murderer, and you know that no murderer has eternal life in Him.” (1st John chapter 3, verse 15) There can therefore be no racial hatred, nor can there be any hatred of one religion or religious denomination by another (Hey ISIS! Hey Taliban! Hey Christian right-wingers! Y'all go back and read that one more time!!), nor can there be any hatred of those who are economically disadvantaged such as the homeless, nor can there be any hatred of gay people just because one considers them 'immoral', nor can there be any hatred of liberals or conservatives, or any other form of intolerance (such as age and gender discrimination). This is the very essence of true Spiritual belief. God put diverse groups of people and cultures on this earth all together in order to teach us, among other things, tolerance of one another. Once tolerance takes root, it leads to communication. Communication in turn leads to understanding, understanding then leads to empathy and empathy to compassion. And when we have compassion for one another, that invariably leads to peace. Peace will inevitably lead to an end to war, poverty, crime and sickness, and with it inequality. What a wonderful world that would be, and it is all within our grasp if we will only embrace tolerance and renounce violence. Let us therefore join together in tolerance, communication, understanding, empathy, compassion and peace. Since the majority of us claim to be Christians, we proclaim ourselves to worship the Prince of Peace. That means we had better be emulating Jesus Christ by becoming peaceful people. And that is how we will all make the world a better place, starting with ourselves. Shalom!

Posted by The Progressive Christian Blog at 12:25:00 PM