I Want My Christmas Back!!

The True Spirit Of Christmas
by Rev. Paul J. Bern 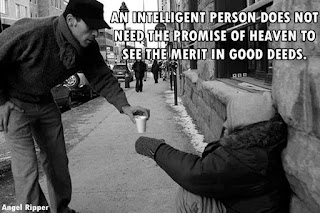 This week as we celebrate the birth of our Lord Jesus Christ, I want to pause and reflect on the true meaning of Christmas, and on how Christmas has been twisted and perverted by the dying economic system known as capitalism that we're all stuck living under. Here in the 21st century, people all over the world are in a holiday feeding frenzy of buying ridiculous amounts of unneeded consumer goods. The only sure outcome of this is for every shopper to wind up even more deeply in debt than they were before Thanksgiving, and to be increasingly insolvent as well. Too many people have collectively forgotten the true reason for the season, the birth of Christ, and they have traded His sacred birth for the blind pursuit of material gain. Instead of worshiping the Son of God, people everywhere are worshiping the almighty dollar and all the goods that it can bring home with them. This is idolatry in its purest form, and as a minister of the Gospel I stand against it!


This rampant money-worshiping has been carried to such extremes over the years that it has carried people from all walks of life past the point of insolvency. As I write this, the average level of indebtedness for any given American is well in excess of 120% of their net worth. In other words, the majority of working Americans are bankrupt, a condition that continues to get worse as time marches on. Clearly this trek into the economic wasteland of bankruptcy is unsustainable. A full two-thirds of the US economy is powered by consumer spending. The true unemployment rate in this country stands at around 15% or more here at the end of 2015, because the government doesn't count those who have given up looking for work as well as those who are working part-time when full-time employment is required. While all this is happening, the US government continues to spend $12 billion per week (see the Defense department or GAO websites) on overseas military excursions, which is similarly unsustainable. The bottom line here is that such obscene levels of spending, which is exacerbated by the Christmas shopping season, will eventually cause the American economy to implode on itself due to corruption from within and crushing debt levels from without. And this may well happen sooner rather than later, so be warned!


We call the day after Thanksgiving "Black Friday". This ominous sounding moniker, which reminds me of the 1970's Steely Dan song by the same name, is actually a forecast of good tidings, especially if one is a retailer. No matter how poorly retail sales have been throughout the year, the giant retailers whose CEO's and top managers rake in millions and millions of dollars per year for themselves can count on Americans to put themselves, their families and other loved ones at risk by spending money that they don't have on gifts that people don't need. Consequently, the wealthy captains of retail can be certain that their profits will be in "the black" starting on the day after Thanksgiving through December 25.


Many Americans who call themselves Christians claim that they place themselves more deeply in debt starting on the day after Thanksgiving as a way to celebrate the birth of a very special Man. As with all religions, not all Christians practice their faith in the same manner. Not all Christians see the full month before the day on which this man was supposed to have been born as a time to fret over the equity with which they part with the money they borrow. Not all Christians use this time to become agitated, depressed and even angry because of the internal and external conflicts they suffer over the distribution of gifts purchased with borrowed money. However, the man, obviously the man that people today refer to as Jesus Christ, was an extremely special Man. This Man is so special that we began counting time once again based upon the year in which he was born. Therefore, many of those who call themselves “followers” or “Christians”, feel the need to become more reckless, not only with their financial standing, but with the Earth's natural resources like the water we drink or the air we breathe. I have had a belly full of this worldwide consumer insanity! Moreover, this consumerism is consuming the consciousness of my fellow Americans as we lose our fiscal minds more and more each year!


It's really not that important, however, to debate the historical narrative of the life and times of Jesus Christ. What's important is that the part of the Word that's dedicated to that life and time emphasizes what many would today call "democratic socialism" (see 2nd Corinth. 8: 13-15; Acts 2: 42-47 and Acts 4: 32-37). Although it's written that, at times, Jesus Christ warned anyone who would listen that they'd better believe in his words and follow his lead and direction lest they spend eternity experiencing unimaginable torture, torment and agony, the bulk of the writing about Jesus Christ describes giving to those less fortunate, plus social and economic inclusion, and world peace. What a different outlook we would have if, every day, from the day after Thanksgiving until Christmas, the goal for those with an overabundance was to search for those who don't have any and, when they find them, give them what they need! Why, it would be just like the unconditional love and peace that Jesus Christ taught us about! You know, being more Christ-like, not hoarding money and goods for oneself, and putting the needs of others ahead of ourselves. That Jesus. The real deal.


What is the available alternative to this? Last year, two people were trampled to death on "Black Friday" as they callously stormed into the money changers' temples. Refusing to participate in this annual orgy of consumption is much more in line with the teachings of Jesus Christ. But the ugly truth is that this behavior is in large part due to American culture, similar to gun ownership. America is the world's top arms manufacturer. There are more guns in American homes than in all the other countries of the world combined. We as a people, as I've written in the past, have some serious soul-searching to do about what it is we really value. As you read just above, America has now become so violent that we can't even go shopping on Black Friday anymore without risking accidental death! And, all this is happening within what is supposedly the greatest country in the world! Lately I've begun to wonder about that. Hey, I'm just one guy trying to turn the time of year that's always fallaciously referred to as a time of "peace on earth and good will toward men" into entire years of "peace on earth and good will toward men."

Posted by The Progressive Christian Blog at 1:42:00 PM