The Solution to the Shutdown Was There All Along. Trump and Congress Both Ignored It.

Our Civics Lesson for This Week, or, Why Adults
Having Temper Tantrums Should Check Themselves
by Minister Paul J. Bern
To view this on my website, click here :-) 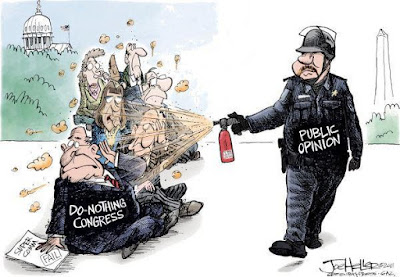 The first thing I'd like to say this week is 'thank God the shut-down is over', or at least for the next three weeks. As I wrote a month ago, holding hostage the paychecks of some 1.2 million people is no way to run a country. Although I admire the way president Trump has refused to go along with the status quo inside the Beltway, especially his opposition to the Deep State, this time around Trump made a serious miscalculation by shutting down the government. Keeping it shut down for five weeks and traumatizing hundreds of thousands of federal workers and their families has compounded his miscalculation. Like the Rolling Stones used to sing, “You can't always get what you want”.

The Bible has some very relevant teachings regarding this very topic. For one thing, angry or selfish people are troublemakers by nature, as it is written: “Fools give full vent to their rage, but the wise bring calm in the end.” (Proverbs 29: 11) As you can see from these words of King Solomon, people who get angry when they don't get what they want are unwise at best, and toxic people at worst. Hear that, all you politicians, especially those inside the Beltway? By pitching a fit, throwing a temper tantrum or collectively holding their breath until they die (Go ahead! Be my guest!), or at least for as long as they could, our nation's leaders have proven themselves unworthy of the offices to which they have been elected. With the 2020 elections looming, every one of them, from Donald Trump on down across both sides of the aisle, has just under a year to get their acts together and learn to work with each other. Otherwise the American electorate will not put up with it.

What else does the Bible have to say about people who let their anger get the best of them? “An angry person stirs up conflict, and a hot-tempered person commits many sins.” (Proverbs 29: 22) Have you ever noticed how uncompromising people operate? 'It's my way or the highway', they will quickly tell anyone within earshot. Have you also noticed they are the ones who seem to get the least done? They are so busy trying to coerce others into doing their bidding that they wind up spinning their own wheels. In the case of the US government shutdown, president Trump ended up spinning his wheels too. Had president Trump tried a more conciliatory approach to get his border wall, he could have achieved different results, as it is written: “A gentle answer turns away wrath, but a harsh word stirs up anger.” (Proverbs 15: 1) If Donald Trump had not taken his usual 'my way or the highway' approach, like he is evidently prone to do when running his real estate empire, the government shutdown may have not ever occurred.

There seems to be quite a bit of this sort of problem throughout America's government. I have observed too much tit-for-tat politics, too much infighting and squabbling, and a heck of a lot of lying, for me to take the federal government seriously anymore. It's also been my observation that an ever-increasing number of Americans feel the same way. What America, and particularly her lawmakers, need to do is call a cease fire long enough to read the following portion of 1st Corinthians: “4) Love is patient, love is kind. It does not envy, it does not boast, it is not proud. 5) It does not dishonor others, it is not self-seeking, it is not easily angered, it keeps no record of wrongs. 6) Love does not delight in evil but rejoices with the truth. 7) It always protects, always trusts, always hopes, always perseveres.” (1st Cor. 13, verses 4-7)

Love, love in Washington? Yeah, because there's a complete absence of it as I write this. While the fight between all the 'my way or the highway' Democrats and Republicans raged on, 1.2 million federal workers came within days of eviction or the commencement of foreclosure proceedings. Seriously, all these people were on their way to being homeless, many with families to look after, and all the combined 462 members of Congress, together with the President, could do was invent more ways to disagree. Even now, the reopening lasts for only three weeks. These people had better get their acts together, or there will be pandemonium in the streets of America. But to get back to the above Scriptural quotation, Washington has far too little patience and far too little kindness, while having an excess of corruption, arrogance, boastfulness and pride.

Washington has dishonored those they are elected to serve with their childish behavior, unlike verse 5 above. Instead of looking out for the interests of the people, Washington is and has been self-seeking. Verse 5 also says that true Christian love should not be easily angered. Yet by shutting down part of the government so he could get his way, president Trump has violated this very Scriptural premise. “Love keeps no record of wrongs.” Hear that one, Congress? You people need to stop sparring with each other, grow up, and take care of America's business. Otherwise the whole country will wither away while our 'representatives' and the president are busy bickering like children. “Love....rejoices with the truth.”

You know, a heavy dose of some truth is what the American people would really like to hear right about now. We want to know the truth about the triple assassinations of the Kennedy brothers and Rev. Dr. King, about the Gulf of Ton-kin incident, about 9/11, and about the start of the 2003 Gulf War. We want the truth about the true extent of the US military-industrial complex, about whether UFO's are actually a secret technology developed by the military or if they are truly alien, and about Antarctica. We want the truth about the currently-mandatory vaccines, the level of corruption in law enforcement and the courts, and the dangers of the pesticides that are being sprayed on all our crops. The American people are collectively so fed up with all the BS in Washington, and throughout the country including our most respected institutions, that there is open talk of civil war all over social media.

“Love always protects.” The whole country was left unprotected during the shutdown, so Trump and Co. missed the mark on that one. “Love always trusts”, yet Congress and the President mistrust each other to this day while the rest of the country goes to pot. “Love always hopes, always perseveres.” For about 35 days, up until this past Friday, there was a complete absence of both of these in Washington. Congress and the President are equally to blame for the shut-down as far as I'm concerned. Their combined lack of good character, patience, perseverance and even-temperament is the reason this shut-down occurred.

Congress and the President have been unkind, untruthful and arrogant, they have gone to great lengths to keep score against one another, and in so doing they have made themselves unworthy of their elected office. It's too early to tell whether this recently-ended shut-down will affect the 2020 elections. But if a second shut-down occurs 3 weeks from now, it could have repercussions that last well beyond 2020. In that event, the likelihood of a third-party candidate emerging to win the presidential election in November 2020 will increase by a factor of two or more. Stay tuned, people, this may get really interesting. Unless Trump furloughs the same 1.2 million people as before in 3 weeks time, and tries to compel a portion to return to their duties unpaid, in which case all hell could break loose.

Posted by The Progressive Christian Blog at 11:49:00 AM