Coming this fall from Author Rev. Paul J. Bern, the Fourth Edition of his landmark 2011 book, "The Middle and Working Class Manifesto", the book of  dissidence for all dissidents everywhere! Do you wish to become the change you seek, but don't know where to begin? Giving this book a good read first will definitely help clarify things for you! 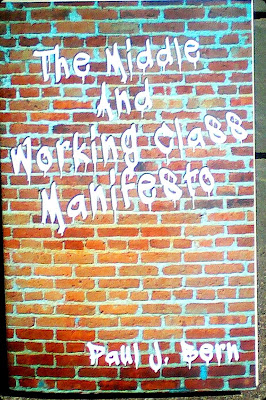 I Dare To Dream
(excerpt from “The Middle and Working Class Manifesto 4th Edition” by Pastor Paul J. Bern, in commemoration of the 55th anniversary of Rev. Dr. King's "I have a Dream" speech)

The march of economic inequality, from which springs the source of racism, poverty, crime, violence, and lack of access to healthcare and higher education, has become the new civil rights issue of the 21st century. (I like to call it Rev. Dr. MLK, Jr. 2.0.) King's dream of unconditional equality throughout the country can finish becoming a reality when the economic barriers that we all face on a daily basis finally come down for good, like an economic Berlin Wall circa 1989. Rev. Dr. Martin Luther King, Jr. spoke to the masses during the 1963 civil rights march on Washington and said, “I have a dream...”. By writing and publishing these words it is my intent to help take up where King's Dream left off, and to do anything I can to help finish the job that he started. And so let me slightly change that to, “I dare to dream”.

I dare to dream of a world in which the gap between rich and poor is gone forever. We all deserve to live in a world where wealth has been redistributed in a peaceful and orderly manner and not by the barrel of a gun. I dare to dream of a country where wealth has been redistributed in 4 ways. First, every worker earns a living wage so poverty can be eliminated. Second, free higher education and vocational retraining must be available to every worker for life, including daycare available to all who need it, because everyone has the right to better themselves at will. Third, I envision an America where quality health care is available to every worker at nominal cost for life. Single-payer healthcare based on the current Medicare model must not be reserved only for those who can afford it, but it must be a fundamental human right for all ages. Fourth, “we the people” demand the abolition of the federal tax code, including elimination of the despised federal withholding tax, which would give every American worker or business owner an immediate 18% pay raise.

I dare to dream of an America where there will be no such thing as someone without health insurance, where every citizen will have lifetime healthcare and prescription drug coverage without qualification, and where there will be the fewest sick days for American workers and their children of any country in the developed world.

I dare to dream of an America where all workers have the right to organize, to a flexible work week and to paid family or maternity leave. Most other developed countries already do this. The US is the only exception and that has got to change. The only remaining question in my mind is whether we can accomplish this peacefully or otherwise, and it is looking more and more to me like it will be the latter.

I dare to dream of an America where affordable housing is the law of the land, where home ownership becomes a right and not a privilege so we can wipe out homelessness, and where the price of a house is limited to the sum total of ten years income of any given individual or household purchasers. I insist on a country where home ownership isn't part of an exclusive club with the highest “credit scores”. It is, and must become, a basic human right. Even the cave men lived in caves of their own!

I dare to dream of a country with new public works programs that put an end to unemployment forever so the USA can have full employment all the time. America's infrastructure needs to be rebuilt, and its inner cities are in dire need of an overhaul. What a better way to accomplish this!
I dare to dream of a new America with an all-new public school and university system that has an Internet-based curriculum that can be updated at will, with a new and more intensive school year, that has viable replacements for standardized testing, and where class size is limited by law.

I dare to dream of a country where teachers, police officers and firefighters make what their Congressional representatives make, and vice verse.

I dare to dream of a new nation where unconditional equality is the law of the land for every citizen without exception, and this will include economic equality. I dare to dream of a new America where there is no more income tax, no capital gains tax, no alternative minimum tax, no estate tax, no self-employment tax, and where families and businesses can have a tax free income unless they are very wealthy. In its place would be a national sales tax, such as a Consumption Tax, where everyone pays proportionately the same tax rate on only what they consume, plus an “excess wealth tax” for persons with annual incomes exceeding $3 million, and for businesses with annual proceeds exceeding $300 million, so America's budget can be balanced and fair.

I dare to dream of a better USA where personal privacy is the law of the land, where identity theft is a thing of the past, and where it will be illegal for employers to obtain the credit files or credit scores of any job applicant.

I dare to dream of a more compassionate America where children have the right to a challenging and progressive learning environment, and where kids will be legally guaranteed freedom from hunger, sickness and violence, and where all God's children will have the legislated right to safe adoption, foster care and day care.

I dare to dream of an all-new voting system, including the abolition of the elitist Electoral College, that is Internet-based, paperless, and that can be accessed from any location using any computer or wireless device, instead of wasting our time and fuel and losing work time going to polling stations, and instead of using unreliable and unsecured voting machines.

I dare to dream of the end to America's sinister war on drugs, where all convicted nonviolent drug offenders can qualify for alternative sentences for their offenses so they may obtain early release, and where any currently illegal drugs having medicinal value, such as marijuana, psylocibin and peyote are legalized, regulated and taxed by appropriate legislation.

Finally, I dare to dream of a world in which all this is easily financially achievable, since all the money that is being wasted currently on the CIA's clandestine wars in Iraq, Afghanistan, Yemen, and to a lesser extent in Pakistan, Somalia, Libya and elsewhere will be redirected towards all these dreams that I have just mentioned. The money is already there, its just being budgeted in all the wrong places. Let me tell you why.

If the US military took all the money it spends occupying Afghanistan (don't forget we've been there for 17 years) for just one day and put it into an interest-bearing account, there would be enough money available to send every American school kid from the first grade up to senior high school, plus through 4 years of college fully paid for, including tuition, dorms, books, food, access to the Internet and to public transportation. Here's another example: If the US government took all that money set aside from one days worth of military expenditures in Afghanistan alone, there would be enough money to build a 2,500 square feet house, fully furnished and stocked with groceries, with all the utilities already turned on, for every homeless person in the US, especially all the homeless kids. That's how easily we can end homelessness in the richest country in the world.

Just as surely as there was an Arab Spring beginning in 2011 that is still ongoing in Egypt, Algeria, Tunisia and Somalia, to name a few, so I am telling you that there will be an American Spring, Summer of Fall in her near future. In fact, I'm surprised it hasn't already begun. Beginning in 2011 with the start-up of the “Occupy” and “99%” Movements, of which I am still proud to be a part, this uprising of the American people against the top 1% will explode like an atomic mushroom cloud over the American political and economic elite, obliterating them all in a bloodless coup without anyone having fired a single shot – so that the remaining 99% of us can peacefully take back what has been stolen from us over the last 100 years. We can only accomplish this by uniting together as one and acting as one body to break free from the shackles of oppression that have us all enslaved. Who is with me today?

You have just read the end of chapter 9 of my book, “The Middle and Working Class Manifesto 4th Edition” by Rev. Paul J. Bern. To visit my author landing page, go to www.authorrevpauljbern.com. Pre-ordering available starting in October. Thanks so much. Shalom!

Posted by The Progressive Christian Blog at 11:13:00 AM