Free sample from "Cannabis Legalization and the Bible" by Rev. Paul J. Bern

This book shoots the “War On Drugs” right out of the sky while proving conclusively that the 'drug war' is actually an all-out war on the American people. Our time to rise up has come!! 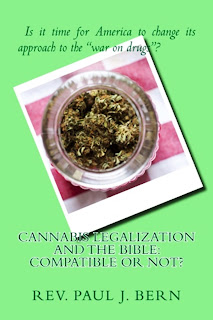 [1] Population size: As a country – as opposed to a prison system – Incarceration Nation is on the small side. Nonetheless, a population of 2.4 million is perfectly respectable: Incarceration Nation has a larger population than about 50 other countries, including Namibia, Qatar, Gambia, Bahrain and Iceland.
[2] Geographic area: There are more than 4,500 prisons in the United States. Let’s assume that each of those prisons takes up about half a square mile of land – a reasonable (and probably quite low) estimate given that most prisons are, for security reasons, surrounded by some empty space. That gives Incarceration Nation an estimated land area of about 2,250 square miles: small, but still larger than Brunei, Bahrain and Singapore.
[3] Population density: No matter how you look at it, Incarceration Nation is a crowded place. If we assume a land area of 2,250 square miles, it has a population density of roughly 1,067 people per square mile, a little higher than that of India. In 2011, federal prisons were operating 39 percent above capacity; in many state systems, overcrowding was much worse. This figure remains largely unchanged.
[4] A nation of immigrants: Like many of the smaller Gulf States, Incarceration Nation relies almost entirely on immigration to maintain its population. You might even say that Incarceration Nation is a nation of displaced persons: most of its residents were born far away from Incarceration Nation, which has a nasty habit of involuntarily transporting people hundreds and sometimes thousands of miles away from their home communities, making it extraordinarily difficult for residents to maintain ties with their families.
[5] Birthright citizenship: An estimated 10,000 babies are born each year in Incarceration Nation. Most are “deported” within months, generally landing with foster families. But Incarceration Nation does have its own form of birthright citizenship, if you can call it that: as many as 70 percent of children with an incarcerated parent end up incarcerated themselves at some point.
[6] Gender balance: International attention to gender imbalances has tended to focus on China, India and other states, but Incarceration Nation has the most skewed gender ratio of any country on Earth: men outnumber women by a ratio of about 12 to 1.
[7] Racial and ethnic makeup: If Incarceration Nation were located in a geographical region matching its racial and ethnic makeup, it would probably be somewhere in the Southern Hemisphere, perhaps near Brazil. Roughly 40 percent of the incarcerated population is of African descent, another 20 percent is of Hispanic descent, and the remaining 40 percent are Caucasian or mixed. For the average American, this means that one’s odds of spending time in Incarceration Nation depend greatly on gender and race: a white woman has only a one in 111 lifetime chance of ending up incarcerated, while a black man has a whopping one in three chance.
[8] Health: One study found that the incarcerated are “more likely to be afflicted with infectious disease and other illnesses associated with stress.” More than half of Incarceration Nation’s citizens are mentally ill, with depression rates roughly on a par with those experienced by citizens of Afghanistan.
[9] Per Capita Spending: Judged by per capita government spending, Incarceration Nation is a rich country: its government spends an average of about $31,000 per year on each incarcerated citizen. Internationally, only little Luxembourg spends as much on its citizens as Incarceration. Some people make a lot of money from Incarceration Nation. Incarceration Nation employs about 800,000 people as prison guards, administrators and the like – almost as many people as are employed in the entire U.S. automobile industry. But the real money goes to the operators of private prisons and the companies that make use of prison labor. Large private prison companies (such as CCA, the Geo Group, and Cornell Companies) boast impressive annual revenues. In 2015, for instance, CCA had annual revenues of about $1.79 billion.
[10] Labor Standards: If you think low labor costs in countries such as China and Bangladesh are a threat to U.S. workers and businesses, labor conditions in Incarceration Nation will dangerously raise your blood pressure. UNICOR, a.k.a. Federal Prison Industries, employs 8 percent of “work eligible” federal prisoners. Hourly wages range from 23 cents an hour – about on a par with garment workers in Bangladesh – to a princely $1.35 for “premium” prisoners, comparable to the hourly wage of Chinese garment workers. Who benefits from these low wages? The U.S. Department of Defense, for one. The DOD is UNICOR’s largest customer; in fiscal year 2011 it accounted for $357 million of UNICOR’s annual sales. UNICOR makes everything from Patriot missile components to body armor for the DOD. No one likes to talk about this, of course: “We sell products made by prison labor” isn’t the kind of slogan likely to generate consumer enthusiasm. But to those in the know – as an online video promoting UNICOR’s call-center services boasts – prison labor is “the best-kept secret in outsourcing.”

The U.S. Civil War, which was fought to abolish slavery, was not really that long ago. Having grown up in Cincinnati, I clearly recall the Ohio River was a dividing line between North and South, and so when the war was finally over, many families had veterans – and casualties – on both sides. It is a vivid reminder of the close links that bind this country to its history of slavery, which still haunts our national conscience. We maintain what can be only be called legalized slavery today – the utilization of prison labor for public and private profit. Many, if not most, of these inmates are themselves the descendants of slaves. And they are making fewer license plates and more defense electronics and oil spill cleanups. Today prison labor is a multibillion dollar business in the U.S. We also have the highest prison population in the world. Are economic incentives at the heart of our sky-high incarceration rates? Today, the U.S. prison system delivers profits to both government corporations and private enterprises in several ways:
One might ask if this population surge could be due to a sudden increase in violent crime in America. A much smaller percentage of prisoners than one would imagine have histories of violence. Just three percent of those in Federal prisons, and a third of those in state prisons, have been convicted of violent crimes. A majority of those in city and county prisons are merely awaiting trial and cannot make bail. As any policeman will tell you, much criminality would be eliminated if drug laws were changed. Mass incarceration on a scale almost unexampled in human history is a fundamental fact of the US today – perhaps the fundamental fact, as slavery was the fundamental fact of 1850. In truth, there are more African-American men in the grip of the criminal-justice system – in prison, on probation, or on parole – than were in slavery then. Over all, there are now more people under 'correctional supervision' in America – more than six million – than were in the Gulags of Siberia under Stalin at its height. America has now created its own series of Gulags and it makes much more than just license plates. Of the 2.3 million prisoners now being held, more than 100,000 work in federal and state prison industry programs. This doesn't mean the usual cooking, cleaning or peeling of potatoes, but work that produces products for sale – about $2.4 billion dollars annually. This industry even has its own trade shows! The government, particularly the Department of Defense, is the biggest customer for the federal prison labor. Most military clothing, furniture, and helmets are made by Federal inmates. It is very likely that they made the furniture at your local post office. Calling directory assistance? You might well be talking to a felon. Federal prison workers, however, are the envy of state inmates, some of whom earn nothing for 60-plus-hour weeks. Texas and Georgia offer no compensation at all. (It is no surprise that these states have highly privatized prison industries as well.)