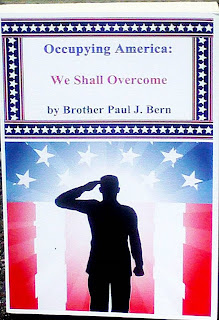 Just as in Europe, we are seeing the results of colossal social failure. The occupiers are the very sort of people, brimming with ideas, whose energies a healthy society would be marshaling to improve life for everyone. Instead, they are using it to envision ways to bring the whole system down. What we are witnessing can also be seen as a demand to finally have a conversation we were all supposed to have back in 2008. There was a moment, after the near-collapse of the world's financial architecture, when anything seemed possible.

Everything we'd been told for the last decade turned out to be a lie. Markets did not run themselves; creators of financial instruments were not infallible geniuses; and debts did not really need to be repaid – in fact, money itself was revealed to be a political instrument, trillions of dollars of which could be whisked in or out of existence overnight if governments or central banks required it. It is nothing but a legalized Ponzi scheme, and all Ponzi schemes eventually implode.

When the history is finally written, though, it's likely all of this tumult – beginning with the Arab Spring – will be remembered as the opening salvo in a wave of negotiations over the dissolution of the American Empire. Thirty years of relentless prioritizing of propaganda over substance, and snuffing out anything that might look like a political basis for opposition, might make the prospects for the young protesters look bleak; and it's clear that the rich are determined to seize as large a share of the spoils as remain, tossing a whole generation of young people to the wolves in order to do so. But history is not on their side. As I see it, if the occupiers finally manage to break the 30-year stranglehold that has been placed on the human imagination, as in those first weeks after September 2008, everything will once again be on the table – and the occupiers of Wall Street and other cities around the US will have done us the greatest favor anyone possibly can.

The Wall Street protests must grow and spread across this country because they are the only realistic hope for change remaining for the 99% of Americans falling behind in this broken economy. Sad to say, but democracy in the land of the free and home of the brave simply no longer works. Big corporations and the wealthy have hijacked the political system for decades with their hefty donations to various political campaigns. Their contributions guarantee that bought-off politicians pass laws and tax breaks to their benefit. It is no secret, everyone is aware of how the system works, and it must be called for what it is: legalized bribery.

With traditional democratic political methods useless, what recourse do ordinary Americans have left? We are now witnessing the only real avenue left: ordinary citizens taking to the streets and demanding change to the rigged economic system that leaves 99% of them behind. It is only a start, but a vital one. Every day more people are awakening to the stark realization that the political and economic system in this country is stacked against them and getting worse.

During the Vietnam era, because they were directly affected, young people took to the streets to protest the war. America's young males were subject to a draft, and the prospect of being shipped off to die in a war they didn't believe in angered them a great deal. And so the war planners wised up and did away with the draft, but look at what has replaced it. America now has perpetual wars for oil, using a "volunteer" military, many of whom have enlisted due to lack of other opportunities. Seemingly unaffected by post-Vietnam wars, students and other young people have been politically inactive since the early 1970s.

But that is coming to an end. Young people are finding few if any jobs awaiting them when they get out of college (that's assuming they were fortunate enough to afford the high tuition). They graduate with no income coming in, but years of student loan debt to pay back. Those without a college or high school degree are even worse off. All of them see the sad reality, that the American Dream is only for the privileged few. If these demonstrations and protests continue to grow and expand, both here and abroad, the big banks, oil companies, billionaires and politicians will have to pay attention and give some ground. Either that, or face the prospect of violent revolution.

To get a print copy just click here; also available in audio format here
For digital format (phones, readers, tablets) please click here! Many thanks to all.....

Posted by The Progressive Christian Blog at 1:22:00 PM