The 'Spiritual, Not Religious' Gospel of Progressive Christianity Grows as More Become Disenchanted With Traditional Religion
by Pastor Paul J. Bern
To view this in a browser, click here! :-) 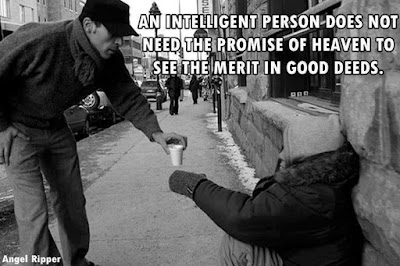 So-called “experts” call them “unaffiliated,” as in a recent Pew poll, or “nones” – or even just 'not very religious.' A 2013 poll by the Public Religion Research Institute divided these groups further into “unattached,” “atheists”, “agnostics,” and “seculars.” One thing is for sure; this ever-growing cohort of non-Church Americans made up, at 23 percent, the single largest segment of Barack Obama’s “religious coalition” that helped him win reelection in 2012 (compared to the 37 percent of white evangelicals who supported Mitt Romney). As a result of this, the unaffiliated clearly had their moment. Media analysis, however, did not go very deep – there was a story that went beyond these names and numbers.


I first published this website after I began to understand who the current crop of unaffiliated people are, what they believe in, and who or what inspires them. Yet we have precious little historical understanding of this critical and rapidly growing demographic. What are their roots? What religious, cultural, economic, demographic, and political processes shaped their sensibilities, habits, and makeup? In order to understand these still-believing nonreligious/unaffiliated/agnostics etc., we need to understand that much of the religious dynamism in the United States happens outside the church walls. Moreover, this has been ongoing for quite some time now. The “rise of the non-religious believers” is but the latest phase in the long transformation of religion into what we now commonly call “spirituality.” In my case and that of my peers, it is Christianity and the strongly held belief in Jesus Christ, not as a distant and mysterious god, but as the Son of God who we can develop a relationship with on a personal level. So if you want to get closer to God, just get one-on-one with Jesus. How do we accomplish that? By asking Him into your hearts, to come and dwell there forever. There is truly no other way to get to know him! By the same token, spirituality can mean many things to many people. The language of spirituality is used by traditional religious adherents as well as the religiously unaffiliated. But only the “nonreligious” have made it into a cliche: “spiritual but not religious.”


The history of American spirituality reveals that our commonplace understanding of spirituality — as the individual, experiential dimension of human encounter with the sacred — arose from the clash of American Protestantism with the forces of modern life back in the nineteenth century. While religious conservatives fought to stem the tide, giving rise to fundamentalism, religious Progressives like myself have adapted their faith to the 21st century, often by discarding orthodoxies (such as my strict Catholic upbringing) in favor of maintaining one's mental health just as anyone would do for a physical ailment, combined with or as a supplement to a personal relationship with our risen Savior. It looks to me like the majority of today’s nonreligious individuals – those who claim no religion but still embrace some form of spirituality – are engaged in the same task of renovating their faith for a new historical moment of major awakening! I am convinced that this moment has in fact arrived in the form of resistance to the Donald Trump presidency. Because this has occurred, right-wing conservatism and the religious right are being dealt a blow from which it will take them a long time to recover, if ever. The Progressive Christians, as I have been calling folks like us (not “liberal”!), will get the football the first time something goes horribly wrong in the Trump White House (only time will tell). It will be up to us to score when that happens, so let's start planning now!


Today’s unaffiliated and nonreligious, like the liberals of previous generations, typically shun dogma and creed in favor of a faith that is truthful, genuine, practical, psychologically attuned, ecumenical and ethically oriented. Of course, Americans of all religious varieties have allowed themselves to be deeply influenced by consumerism, but media and markets are shaping the religious lives of those without formal institutional or community ties. The religiously unaffiliated might not attend services, but they “have” their religion in many other ways: they watch religion on TV and listen to it on the radio; find inspiration on the web; attend retreats, seminars, workshops, and classes; buy candles and statues, bumper stickers and yoga pants; take spiritually motivated trips; and, perhaps most significantly, buy and read books. Books have been the most important conduit for spreading the 'spiritual but not religious' gospel.


This dependency on the consumer marketplace, and especially books, has had significant consequences for the religious lives of all Americans, especially the unaffiliated. First, it has enhanced the tendencies within American religion toward a therapeutic understanding of life from a spiritual vantage point. The profit-oriented commercial presses that came to dominate religious publishing naturally pursued the largest market possible for their goods, and seized on the nondenominational, nonsectarian, and psychologically modern forms of faith advanced by the religious left as a common American Christian vernacular. These trends have only accelerated from the 1920s to the present, so that now the line between religion and self-help sometimes disappears in the spirituality section of Amazon. Second, spiritual consumerism has fostered books that allow some readers entry into religious worlds to which they have not been previously exposed. Since the invention of the printing press, the lines of denomination and tradition have gradually mattered less and less. This process has accelerated greatly with the relatively recent invention of the Internet.


Progressive Christianity's rise and liberal Protestantism’s organizational decline has been accompanied by and is in part arguably the consequence of the fact that the Republican party has recently won the White House and Congress. The cultural victory that is the anti-Trump backlash is happening now because more Americans have been driven away by conservatism in light of a Trump presidency. In other words, leftist religious values and sensibilities became more and more normalized culturally speaking. The recent chapter 7 bankruptcy of Family Christian Stores is only the latest example of the decline of “Religion, Inc.” Even as religious affiliations continue to decline, on-line churches combined with Christian but nondenominational book sales and TV shows are continuing to proliferate. In the process, Christianity is becoming as interconnected as the rest of the world, which can only result in more rapid growth. This is very encouraging news for people like me who wish to spread the Gospel as widely and effectively as they can!
Posted by The Progressive Christian Blog at 1:14:00 PM