More Lies From Our Government

This Week's Bogus Unemployment Report Is a Sin Against Us All
by Pastor Paul J. Bern 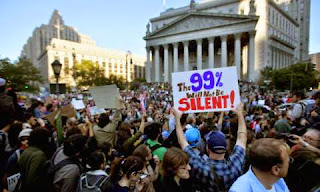 
I have always believed that being a good Christian means standing up against social and economic injustice. After all, being religious without putting one's faith into action is like calling oneself a Democrat or Republican without ever voting. The Bible says in the New Testament, “Faith without works is dead”, and I'm a firm believer in putting that into practice. One social injustice that I wrote about in my 2011 book, “The Middle and Working Class Manifesto” was the outsourcing overseas of what used to be good American middle class jobs. I have some ideas about what is wrong or unjust in this great country of ours, and the following is just one example of what I would like to see fixed within society at large. I am talking about this week's federal government's press release that puts American unemployment at 4.6%. This simply hilarious number is being peddled to the American people at a time when only 61% of American adults are working. So, we're supposed to believe America has 4.6% unemployment while over one third of our workforce has given up looking for work out of sheer discouragement!

Now that Washington is waking up to the destructive impact of outsourcing good middle class jobs overseas, something the American people have known about for years, globalism's advocates have decided this facade of lies has to be maintained by the elite 1% at all costs. The Wall Street Journal, a supposed bastion of truth, recently stated that "the fact is that for every job outsourced to Bangalore, nearly two jobs are created in Buffalo and other American cities." I bet “Buffalo and other American cities" would like to know where these jobs are. On October 25, 2011, 60 Minutes had a program on unemployment in Silicon Valley, where formerly high-earning professionals have been out of work for two years and, today, cannot even find part-time $9 an hour jobs at Target.

The claim that jobs outsourced by US corporations increases domestic employment in the US is one of the greatest hoaxes ever perpetrated on the American public (excluding the biggest one, which is the so-called “Federal Reserve”). Based on a bit of research that I have done from an economics standpoint, I can tell you that our country's governmental and business leaders have reached this erroneous conclusion by counting the growth in multinational jobs in the U.S. without adjusting the data to reflect the acquisition of existing firms by multinationals, and for existing firms who have turned themselves into multinationals by establishing foreign operations for the first time. There is no new multinational employment in the U.S. Absolutely zero. Existing employment simply moved into the multinational category from a change in the status of firms to multinational. American workers have become expendable because corporate America has decided they are too expensive to keep around. I know this to be true because it once happened to me.

The jobs that replaced the ones that were outsourced overseas for pennies on the dollar consist of waitresses and bartenders, health care workers, social services, retail clerks, and while the bubble lasted, construction. These are not the high-tech, high-paying jobs that the "New Economy" promised, and they are not jobs that can be associated with global corporations. Moreover, these domestic service jobs are themselves scarce. Just ask anybody trying to find one. Until this past year the construction jobs had all but vanished. Did you ever wonder how it was possible to have simultaneously millions of new good-paying middle class jobs and virtually the worst income inequality in the developed world, with all income gains accruing to the mega-rich? Or was that just me?

Education is no longer the solution it once was. For example, we already have more engineers than we have jobs for them due to outsourcing. A Philadelphia marketing and research firm called “Twentysomething” found that 85% of recent college graduates planned to move back home with parents. Even if members of the "boomerang generation" find jobs, the jobs don't pay enough to support an independent existence. And let's not forget that nearly all of these recent graduates have student loans with payoff balances in the tens of thousands of dollars. This in turn ruins their credit, which makes finding employment even more difficult. Reporters repeat the lie that the unemployment rate is 4.6%. The government's own more inclusive rate stands at 17%. Statistician John Williams, who counts unemployment the way it is supposed to be counted, finds the unemployment rate to be 22%. In my 2012 book, “Occupying America: We Shall Overcome”, I estimated the total unemployment rate to be 24%. Near the end of 2016 as I write this, total unemployment plus under-employment remains stuck at roughly the same figure.

To keep our eyes off the loss of jobs to outsourcing, policymakers and their minions in the financial press blame US unemployment on alleged currency manipulation by China and on the financial crisis. The financial crisis itself is blamed by conservatives on low-income Americans who took out mortgages that they could not afford, and on US “entitlement” programs. In other words, the problem is China and the greedy American poor who tried to live above their means, or who are allegedly too lazy to work. With this being the American mindset, you can see why nothing is being done to save the US economy.

We need to stop blaming poor people and minorities for America's problems. If anyone wants to know what is wrong with our country, the answers are located inside the D.C. Beltway, and they are there in abundance. This country can end or greatly limit unemployment, homelessness, poverty and economic inequality by simply reeducating its population. The Bible says in the Old Testament, “The people perish for a lack of knowledge”, and it's ever so true even after all the centuries that have gone by. The US is the only remaining developed country that does not do this for its citizens. The same can and should be done today, and I think it should also be a jumping-off point for overhauling or replacing the US public school system.

Take all the long-term unemployed, particularly older workers like I was, and send them back to school for up to two years (four year programs would be available at extra cost using my idea), and allow them to earn the degree, diploma or professional certification of their choice. Do the same for all parolees, as well as all homeless individuals who are judged healthy enough to work – anyone who might otherwise find it nearly impossible to find employment. Should the taxpayers pick up the tab for this? No way, let corporate America be compelled by law to pay for the retraining of these still-valuable US workers! If they can afford to send our jobs overseas for pennies on the dollar, then paying for up to 2 years of school to teach new trades to anyone who wants retraining should similarly only cost them pennies on the dollar relative to their exorbitant annual profits. Moreover, these multinational corporations already engage in enough tax dodging and evasion to pay for all of it!

There is a price to be paid for social and economic injustice, and it's a steep price too. Human being are driven by, among many other things, a desire for achievement, or to better one's lot in life. Those who see opportunities to improve themselves or their situation are by nature predisposed to take advantage of that opportunity, whatever it might be. So, when people find themselves being denied opportunities to succeed, along with the rewards that accompany that success, they resent it. It hurts our feelings because it seems as if we are being punished for wanting to better ourselves, as if we have done something wrong. There are those who might say, “This is something that's beyond my control”. But I continue to maintain that only happens when one capitulates to that 'something', whatever it may be. But if we band together and fight the 1% elitists, we have them outnumbered by 99 to 1, and I predict that is exactly what will happen if our new president sells out to Wall Street like he seems to be doing. As the late president Kennedy once said, “Those who make peaceful revolution impossible make a violent revolt inevitable.”
Posted by The Progressive Christian Blog at 12:35:00 PM