Our new president, the Bible, and racism in America

President Trump, Racism in America, and the Bible
by Pastor Paul J. Bern 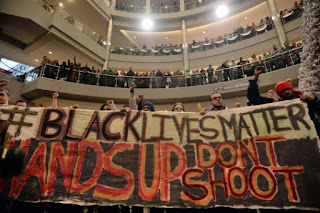 Lately I have received a little negative feedback from some of my Christian readers saying that I should not be trying to blend religion and politics because it causes too much controversy. Interestingly enough, I'm not hearing any of that from my secular readers on this blog, nor on my other one, the 99% Blog (on Wordpress.com or Blogspot.com). Same thing goes for my website, if you're not already there. I have thought about this issue with considerable deliberation, and I have gone back and re-read some of what my Bible has to say about that. I use three different versions to study from, too, just to make sure I get things as close to being right as I can. Let me sum up my conclusion to this issue in just this one sentence: The two primary reasons Jesus was put to death on the cross was because he preached against organized government and organized religion. For what other reason did he say, “I am the way, the truth, and the life. No one can come to the Father except through me”?

You may say to yourself, “That's all fine, but what does this have to do with mixing religion and politics”? Well, in a way, my above quote covers the religious aspect of this. For a quote from the Bible about the political side of this, with religion blended in, let's go over to Matthew's gospel chapter 23, verses 2-4, and I quote: “The teachers of the law and the Pharisees sit in Moses' seat. So you must obey them and do everything they tell you. But do not do what they do, for they do not practice what they preach. They tie up heavy loads and put them on man's shoulders, but they themselves are not willing to lift a finger to move them.” Isn't that what's been happening today? Religious leaders demand ten percent of people's incomes so they can afford to buy jet fuel for their planes and remodel their 50,000 square foot mansions. Police officers enforce the law on one hand while shooting unarmed people for committing minor traffic violations with the other. Our governments make the laws and administer our country, state and local governments, yet government corruption is well known, especially at the federal level. Jesus blended religion with politics, and there are many more examples besides this one. If Jesus did it then I as his follower, messenger and ambassador will do the same.


Which brings me to the topic of this week – our newly installed government. One of Donald Trump's first appointees has been one Steve Bannon, the editor-in-chief of Breitbart.com, a right wing fringe website that can be so radical at times that it makes Alex Jones and Infowars.com look like child's play. On CNN's website Saturday morning, they had this to say, “Steve Bannon has no regrets. The ex-Breitbart executive, who serves as Trump's chief strategist for the new administration, told The Hollywood Reporter that "darkness is good." "Dick Cheney. Darth Vader. Satan. That's power. It only helps us when they (liberals) get it wrong. When they're blind to who we are and what we're doing," he said in an interview published Friday, his first outside of Breitbart since the election.

Darkness is good? Satan equals power? Just as bad, this man idolizes Darth Vader and regards former vice president Dick Cheney as a role model?? I don't know about you, but I am deeply concerned about Mr Bannon being in charge of anything in America's government. What does the Bible say about this, and about people like Steve Bannon (and there's plenty of them)? “This is the verdict: Light has come into the world, but men loved the darkness instead of the light because their deeds were evil. Everyone who does evil hates the light, and will not come into the light for fear that his deeds will be exposed. But whoever lives by the truth comes into the light, so that it may be seen plainly that what he has done he has done through God.” (John 3: 19-21) Need more proof? You got it, and again I quote: “This is the message we have heard from him that we declare to you: God is light; in him there is no darkness at all. If we claim to have fellowship with him yet walk in darkness, we lie and do not live by the truth. But if we walk in the light, as he is in the light, we have fellowship with one another and the blood of Jesus, his Son, purifies us from all sin.” (1st John 1: 5-7)

Now, let me tie all this together with one more quote from Scripture, this time from the prophet Isaiah in the Old Testament: “Woe to those who call evil good and good evil, who put darkness for light and light for darkness, who put bitter for sweet and sweet for bitter. Woe to those who are wise in their own eyes and clever in their own sight.” (Isaiah 5: 20-21) Although I have the greatest respect for Donald Trump, I have serious misgivings about his choice of Steve Bannon for his Chief of Staff, a man who is apparently quite proud of his ties to the so-called “White Nationalist Movement” and other right-wing extremist groups. The White Nationalists are basically the KKK with a fresh 21st century style makeover, and their political leanings are decidedly Nazi in nature. Many of these people openly admire Adolf Hitler, which tells us everything we need to know about all these people.

Steve Bannon is a demonic racist, pure and simple. Donald Trump knows that, or he certainly should, and evidently that does not bother him. Well, it bothers me a whole lot! The last thing America needs is a throwback to the bad old days of Jim Crow, the John Birch Society and the Ku Klux Klan. President Trump's nomination of former senator Jeff Sessions for attorney general is nearly as bad. I grant you that Mr. Sessions is no neo-Nazi, but he's still a redneck from Alabama who has little or no regard for people of color. The Bible has more than a few things to say about racism, and it's all bad. Let me give you a couple examples: “Anyone who claims to be in the light but hates his brother is still in the darkness. Whoever loves his brother lives in the light, and there is nothing in him to make him stumble. But whoever hates his brother is in the darkness and walks around in the darkness; he does not know where he is going because the darkness has blinded him”. (1st John 2: 9-11)


OK, now that we have seen what the apostle John wrote about hateful people – and especially those who normalize that hatred and who try to make it seem acceptable – let's see what Jesus himself had to say about it: “But I say if you are angry with someone you are subject to judgment! If you call someone an idiot, you are in danger of being brought before the high council. But if you curse someone, you are in danger of the fires of hell.” (Matt. 5: 22) So what Jesus was saying was these three things:
[1] Whatever level of anger we show towards our brothers and sisters, God will show right back to us.
[2] In whatever way we are abusive towards others whom we perceive to be inferior to ourselves, the ruling authorities will punish us accordingly in the same way, and deservedly so!
[3] When we curse others, we ultimately curse ourselves because the same God created us all in his image and likeness. Showing contempt for God's creations is equally contemptuous in God's sight.

In closing, I will confidently predict this one thing – if the new Trump administration starts showing contempt towards or begins to mistreat minorities and people of color, or if any attempt is made to begin massive deportations of undocumented aliens back to their home countries, there is going to be major civil unrest the likes of which have not been seen in over a generation. If fact, these protests will rival, and probably surpass, the antiwar protests of the 1960's and early 1970's. So if the new administration doesn't get its act together and stops staffing our federal government with a bunch of nasty haters, and if the minimum wage is not raised substantially, there may well be political unrest all across the country soon. People are hungry and thirsty for change, and they're all tired of government corruption and ineptitude! The main positive thing I can truly say about the incoming Trump administration is his pledge to normalize US-Russian relations, a process that has already begun. As a result, America and Russia are both breathing a sigh of relief, and I suspect the Lord is too. But there must not be even the appearance of racism and favoritism in our incoming presidential administration, or president Trump will have to answer to the people for it!

Posted by The Progressive Christian Blog at 7:53:00 AM