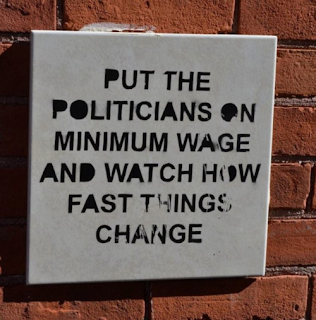 In light of this past week's Republican debate on TV, which I didn't bother to watch, I thought it would be timely to comment on the state of conservatism in our country today as it relates to social and economic injustice. I like to relax and unwind at the end of each workday by watching a couple of hours of Christian television in the evening, primarily on TBN (Trinity Broadcasting Network, channels vary so check your local listings) and You Tube. Most of the time the shows and the preaching are pretty good, although some programs are better than others. The best shows are the ones that go deepest into the Word as far as their interpretation of the Scriptures is concerned. The ones that aren't quite so good tend to get way, way out there as far as their teaching and preaching goes (such as the prosperity gospel and word of faith movements, among others), with the preachers espousing radically right-wing conservative interpretations of Scripture that are ill-informed at best, or bigoted, and even outright heresy at worst.

I have a pretty good idea as to why these right-wing neoconservative preachers and teachers have such an extremist view of the Bible. I think it's because their version of Scripture matches their arrogant beliefs, giving these types of people an egocentric viewpoint on their walk with Christ. Although these men and women TV ministers are certainly entitled to their own opinions, I strongly disagree as to their application of conservative ideology to the interpretation of the Scriptures. I have an even bigger problem with biblical quotations being used in such a way as to twist them around to fit a certain point of view or for financial gain (such as tithing according to Old Testament law instead of worshiping Jesus Christ as the fulfillment of the Old Law). Not all Christians are conservative right-wing extremists nor are we all evangelical Rush Limbaugh's. Many of us like myself are much more moderate for a couple of reasons. First, when we read the Bible, especially the four Gospels, we realize that Jesus was incredibly liberal by today's standards, and also far more peaceful then the current crop of presidential candidates who seem to be desperate to prove who among them is the most conservative. Twenty three years ago when I first gave my heart and soul to Christ, the Spirit of the Lord spoke to me clearly, saying that if I wanted to worship the Prince of Peace then it is necessary for me to become a man of peace (which I was not back then). So I pass that on every chance I get, and it most applies to anyone who has anger issues or who holds grudges. It's time for all of us to get go of those things.

Second, it has been my observation that the most religious people in public office or running for an election are often the most argumentative and most prone to resorting to violence to solve problems. Those who become indignant at the mention of the word 'abortion', showing their outrage before the TV cameras at the taking of a single unborn life, have no problem sending their/your sons and daughters off to war, and cheering when a predator drone blows up another house full of unarmed Afghan, Iraqi or Syrian civilians. God must be shaking His head in disbelief right about now. We as a nation have gotten to a point in our history now where the military-industrial-incarceration complex that’s still clinging to its soon-to-be former power and refusing to move on, is appealing to one of military history’s most colossal mistakes, basking in the glory of the act, while forgetting the bitter irony of the event.

The Christian right, which is neither, wants glory. They want credit for being the heroes, for saving civilization, drawing on the outdated legacies of World War Two and the Cold War. The irony is their narrow-mindedness, their lack of perception, and their superficial perspective on world events due to their refusal to learn the lessons of history, dooms them to be a curse upon their land. Nothing is getting done, because of the Conservatives of this land. And what are conservatives fighting to defend? One of the worst situations this country has been in for a long time. Want reform of the financial markets? Screw you, we're filibustering. Want health care reform? Too friggin' bad, forty thousand people a year can die so the rest can be charged twice as much as the rest of the world for comparatively inferior care.

Of course, resisting this evil and predatory system is painted as resisting big government and the “evil tax-and-spend liberals”. Some even call the American people's resistance as insurrection or as politically subversive (such as the Occupy and 99% Movements, among others). Never mind that we now have Obama-care, which is not the most desirable national health care out there but it's better than being completely uninsured and going to an ER for medical needs. Never mind that the conservative right-wingers own conduct speaks poorly to their skills as fiscal guardians (such as invading Iraq in 2003, among others). The Republicans have always needed their dark enemies to highlight their glorious crusades. They did it in Vietnam, twice in Iraq, and Afghanistan. Clandestine wars are ongoing in Libya, Yemen and Syria. Everything was about defending what GW Bush and his Congress was doing at the time, everything was about justifying colossal mistakes. Whether turning a soldier's request for more armor into another chapter in the epic of the “evil liberal media”, or blaming hurricane Katrina's death toll and the subsequent humanitarian disaster on the victims themselves, or coming up with a million different justifications for outing former CIA operative Valerie Wilson, the Republicans devoted themselves to the task of rationalizing failure on a massive scale. The most recent effort has been the prosecution of private Bradley Manning (or Chelsea, take your pick) due to his/her alleged “complicity” in helping Wiki-leaks and its founder, Julian Assange, publish a treasure trove of supposedly secret messages that exposed the sheer folly of America's involvement in Iraq and Afghanistan, and the lies about it disseminated among the American people by those in positions of public trust.

President Obama has the right idea regarding his public option, otherwise known as “Obama-care”, putting everyone on a national health care system of sorts, but I would be surprised if he will be able to make us all pay for it. Instead, health care is a basic human right that should be given away to the general public without cost. Instead, conservative right-wingers have made any form of universal health care coverage in the US to be this great evil, health care reform has to be government taking decisions from your doctors hands. Never mind the facts. In fact, forget about 'em. The Republicans want grandiose rhetoric and emotionally overwhelming appeals. Nobody wants to talk about the underlying issues, such as the fact that our for-profit health care system is broken, and greed is what broke it to the point that it will have to be replaced. I have outlined one good way to go about this in my first book, “The Middle and Working Class Manifesto”, but I will give you the condensed version in three sentences. First, combine Medicare, Medicaid, all US government health care plans and the VA hospital system into a single national health care system. Second, streamline the various inter-agency departments by eliminating all duplicate positions. Third, abolish Medicaid since it will no longer be needed and have Web-based Medicare replace it all. For additional details, you'll have to buy the book.

If I sound angry here, that is only to be expected. This is what I've fought for during the last several years after having to take early retirement for medical reasons. I have been through all this stuff myself, seeing the system from the patient's point of view. I don't want to live in a country where the government exists in an alternate universe, where the politicians are so oblivious to reality. I don't want to live in a country where the needs of the top 1% of US economic affluence are taken care of with five-star service while the remaining 99% huddle in emergency rooms waiting their turn to see a doctor for hours on end. Since I don't have plans to leave this country that I love, I have plans to be part of a movement of millions answering the call around my nation, to make a new government that runs this country as a part of the reality-based community. Rather than jump the gun and jump to conclusions as it suits some ideology, I'm in favor of a government that is constantly on the move, doing objective good for this country.

I'm in favor of the conservatives finally coming to grips with the fact that their policies haven't been working. They can remain conservatives, keep on favoring conservative ideas, but what gives them the right to let things go straight 'to hell in a hand basket' to prove ideological points? They are more out of the majority than they've been in years in no small part due to their failure to put politics aside and deal with an emergency with the fortunes of the nation, rather than the fortunes of their party first and foremost. Failure is not an option for me. A government that lets things fail to prove political points is not doing its job. A government that justifies failure by making political points, is not worthy of governing this country.

For the last two decades, America has been the victim of unwise policies, policies that presupposed a willingness for restraint from the financial sector, policies that presupposed that preservation of a military strategy and distraction from a critical theater of battle would somehow lead to success. These were people who looked at our economy in the summer of 2008 and said 'the fundamentals of the economy were sound', right up until the point where the crash of September 2008-2010 made the obvious truth unavoidable. I don't want more government by people who are simply persisting in their policies until events overtake them and make it impossible for them to maintain the status quo. I want people who are adapting to our problems in advance, and allowing the government that flexibility.

The last thing this country needs is another decade or decades worth of governance from an outmoded capitalist economic system that cannot tell the difference between a defeat and a victory and resists all efforts to bring its attentions to these problems. The Democrats aren't perfect, like Obama might say. There is at least a recognition among the rank and file that the current situation is not to be tolerated, or continued. The charge of the Conservative Light Brigade should end, and this country should be allowed to get back to deciding what the wise thing is, not what is politically convenient to an unwilling, undignified minority.

Posted by The Progressive Christian Blog at 12:39:00 PM