Celebrate Thanksgiving by buying and doing nothing

Celebrate Thanksgiving By Buying Nothing This Year
by Rev. Paul J. Bern 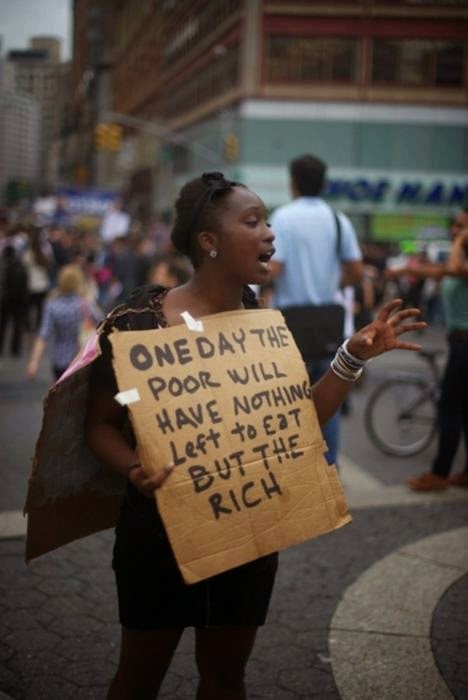 Is there a tradition any more primitive or disgusting practiced across America today than that of Black Friday? Hordes of consumers mob stores for great deals on useless "goods" like flat screen TVs that one must have a cable TV subscription to watch it, smart phones and tablet computers that break every time they're dropped, video gaming “stations” that are addictive, or the latest clothes manufactured by Southeast Asian or Latino children in some God-forsaken sweatshop somewhere. Every single year I am further struck by the apparent lack of focus by Christmas shoppers on the original reason for the season. Thanksgiving is the holiday when we give thanks for what we have and count our blessings. It is a time to put things into perspective and realize that we are not so poor after all, economic hardship notwithstanding. St. Paul wrote, “I know what it means to have little and I know what it means to have plenty. I have learned the secret of being content no matter what my circumstances.” We would all do well to learn to do the same.


The Christmas shopping season is the time when we are supposed to be celebrating the birth of our Lord. Instead, all I see each year are large crowds of people caught up in an orgy of consumerism and materialism. Hordes of people buying this and that, spending like there is no tomorrow in a feeding frenzy of capitalist consumerism. Think about how much good it would do if the birth of our Lord was celebrated with that much enthusiasm. What if we were to organize a National Buy Nothing Day to protest economic inequality? Or how about a $15.00 per hour minimum wage? Or maybe to protest the cost of higher education, we should boycott our student loans! What if everybody stopped sending in their payments until the loans were forgiven? Two thirds of the US economy is consumer spending. Think of what a shock wave it would send if any such national protest/boycott were to be organized!


We're in a pretty messed up place politically and environmentally. Multinational corporations and financial firms pretty much own the government. Global warming is not only a real and present danger, but rapidly accelerating. There is a plastic "raft" in the Pacific Ocean bigger than Texas. And as people we're constantly being taken advantage of to make this situation last longer so that corporate profits and bonuses can climb even higher than they are now. The strong link between these two things – our society's consumerism and the terrible political, social, environmental, and economic situations we're in – demands immediate and urgent action. By buying things from these corporations and feeding into this model of an economy, we only encourage and empower it. So I'm asking you: please join me in buying nothing this coming weekend.


So this Black Friday, I'm calling for a Wildcat General 3-day Strike. I'm asking tens of millions of people around the world to bring the capitalist consumption machine to a grinding – if only momentary – halt. I want you all to not only stop buying for 72 hours, but to shut off all but your most essential lights, all your televisions and other nonessential appliances. I'm asking you to park your car, turn off your phones and log off of your computer for the day. I'm calling for a three-day interlude of fasting and prayer. From sunrise to sunset we'll abstain en masse, not only from holiday shopping, but from all the temptations of our greed-based and debt-funded lifestyles. Ideally, everyone will power down their electricity for the day and just enjoy some time with their family or friends or both. If you can't do that, at least refrain from the Black Friday madness. Don't go to a store for some kind of deal. Avoid the stress by not going out in the traffic. Don't shop at the big box stores - in fact, don't shop anywhere. Just take a break for Friday, Saturday and Sunday and do nothing at all.


You know the old truism: a journey of a thousand miles starts with a single step. Things are falling apart – the temperature rising, the oceans churning, the global economy heaving – so why not do something? Take just one small step toward a more just and sustainable future. Make a pact with yourself: go on a consumer fast. Lock up your credit cards, put away your cash and opt out of the capitalist spectacle. It may be harder than you think, that is, the impulse to buy is more ingrained in many of us than you may have ever realized. But you will persist and you will transcend – perhaps reaching the kind of epiphany that can change the world.


Some might criticize me for publicizing this idea during such a tough economic times. "We need people to consume in order to drive the economy!" To that I say this: it's not good if we need people to buy useless crap in order to maintain our economy. That needs to shift fundamentally. And the only way to shift it is to stop buying useless crap. So will you join me? Will you take the plunge and break the chord from your normal consumerist ways? Let's all stay at home Friday, Saturday, and Sunday, and have a time of prayer and fasting, and some quality time with each other. In this case, fasting doesn't mean we must totally abstain from food. But you can go on a liquid diet (soup only, etc.) for 3 days without doing yourself any harm. I have done this before successfully, so if I can then so can you! If we're going to give thanks, then let's begin by giving thanks to God.

Posted by The Progressive Christian Blog at 12:23:00 PM